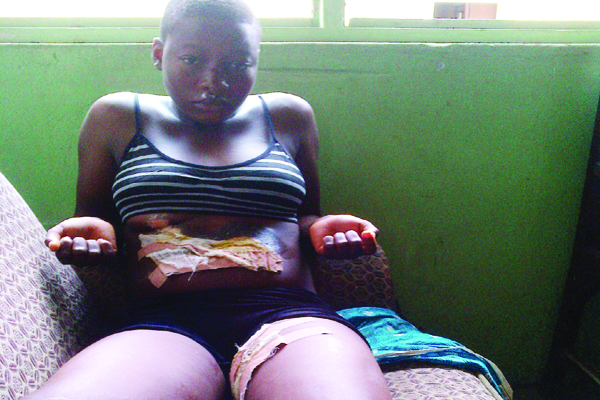 A 16-year-old girl, Bimpe Badmus, has been burnt with a hot pressing iron, allegedly by her aunt who accused her of sleeping with their landlady’s son.

The incident occurred on Ogunjirin Street, Ketu on the outskirts of Lagos.

We learnt that Miss Badmus’ aunt sought assistance of two friends, Khadijah and Iya Daniel, to hold her hands and legs before using the iron to burn her on several parts of her body.

Miss Badmus was said to have confessed sleeping with the landlady’s son.

An eyewitness said the girl was severely beaten and chased out of the house.

He said: “They all live in the same compound. It was Khadijah that told Bimpe’s aunt that she was sleeping with the landlady’s son. Khadijah brought the hot iron from her room and gave it to Miss Badmus’ aunt while she and Iya Daniel held her neck. It was when they chased her out that the neighbours rescued her.

“The annoying thing is that it is not as if these married women are clean. I don’t know why they did that to her. It was when residents couldn’t stand the horrible situation that they took them to Ketu Police Station.”

Mr Fatai, who claims to be Miss Badmus’ distant brother, said: “When I got to the police station to see Bimpe, I was sad because the sight was horrible. My sister (Bimpe) was writhing in pains and when I asked the Divisional Police Officer (DPO) to release her for treatment, he refused. I asked the aunt if she was under a spell to have gone this far because it won’t stop her from having an affair. This is cruel.”

The landlady’s son’s elder sister, Tope Abimbola, said: “Even before they were taken to the police station, she was in pain. I thought she was going to die. I quickly went to a nearby pharmacy to get an ointment to relief her of the pains. It is really painful. She has been admitted at the General Hospital, Ikeja and she is responding to treatment,” he said.

Khadijah’s husband, Jimoh, said his wife had been problematic.

When The Nation visited the police station on Tuesday and asked the DPO why the girl was still being kept despite her condition, the officer declined comment. He walked the reporter out of the premises.

Eye witnesses, neighbours and on-lookers were stunned when the DPO said he did not care if his reactions are published in the newspaper.

But, Bimpe denied sleeping with the landlady’s son.

”He has never slept with me. I am really in pains. I can’t even go home because I don’t know what will happen. While they tortured me, they kept asking so many questions. I pray God heals me fast,” she said.

Lagos police spokesperson Patricia Amadin, a Deputy Superintendent of Police (DSP), said the suspects had been arrested and will be charged to court.