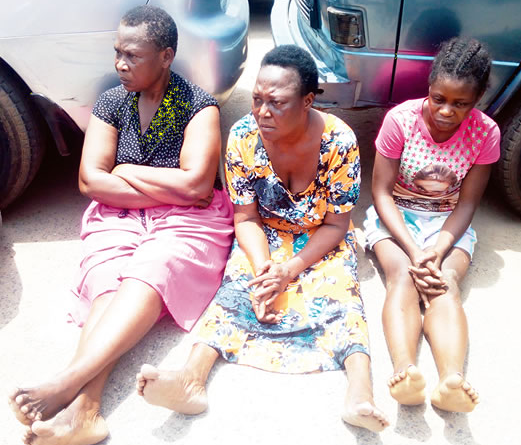 Meet Madam Rita Eze, a 50-year-old Granny who was an active member of a syndicate who specialises in stealing children around Lagos and selling them in different part of Anambra state.

On Tuesday, Eze was paraded along with two members of her syndicate at the Ikeja Lagos Police Command Headquarters.

Eze and others reportedly connived with one Samuel to abduct a 3-year-old girl named Semilore Adebiyi from her parents home in Alagbado area of Alagbado.

The child was later handed over to Eze who sold her to one Nwekei for N500,000 in Anambra state.

Semilore was rescued in Badagry on the 23rd of February 2017.

Here is the confessional statement of a member of the syndicate, Samuel who implicated Madam Eze.

Two other children kidnapped by the syndicate (One 4-year-old Farouk and his sister) are yet to be found.