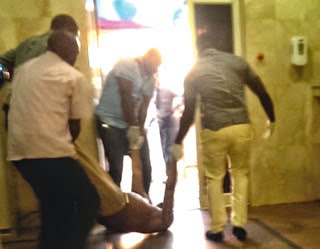 A suspected gay, Mohammed Snu, has been murdered by his partner, Mohammed Umar, inside a room of a hotel in Garki, Abuja.

It was gathered that Snu died after he was stabbed multiple times in the ribs with a screw driver by Umar last Thursday.

The deceased, who was a regular guest at the hotel, was said to have invited Umar for sex, but their romance went sour when Snu refused to pay his partner for the second round of sex.

A source in the hotel told PUNCH Metro that the two men had sex twice, but Snu allegedly refused to pay for the second round, which led to a scuffle.

The source said, “The man had just come back from a mosque where he went for prayers with his partner when we heard a loud noise from his room and a voice saying ‘ya kuri (please, don’t be angry)’. By the time we forced the door open, we saw Umar standing naked and Snu lying dead on the bed with stab injuries on his body. We immediately called the police and Umar was arrested.”

PUNCH Metro learnt that the police came back later and whisked away the hotel manager for interrogation.

The incident was said to have generated an uproar around the Garki neighbourhood, as residents gathered in clusters to discuss the tragedy.

Our correspondent was told that policemen from the FCT Command came in a white pick-up van and took the corpse away.

They also drove away his white Mercedez salon car with Abuja registration number, KUJ 883 AQ, which was parked on the hotel premises.

The FCT Police Public Relations Officer, Peter Okechukwu, who confirmed the incident, explained that the deceased invited the suspect to massage him in his hotel room, saying he had pains in his ribs.

He said, “In the course of the massage, Snu asked Umar to undress for sex, and from there, they engaged in a scuffle leading to the stabbing of the deceased by the suspect. It was the loud noise from their room that attracted the hotel workers.

“When our men got to the hotel, we found the deceased and the suspect naked. Investigations have commenced and we will soon know what actually transpired behind the closed door.”