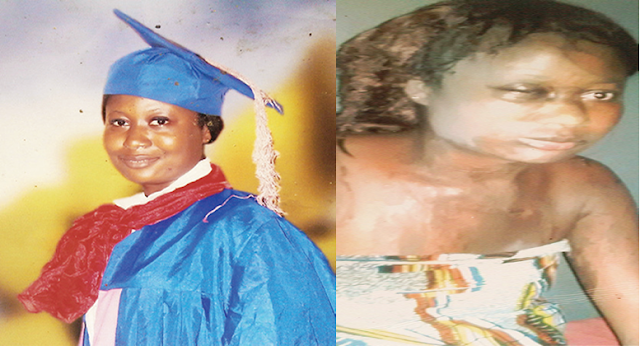 July 1st, 2015 – Picture: Man Attacks Lady With Acid In Surulere Lagos For Breaking Up With Him

Pictured above is Rosemary Nanaifa, a 23-year-old lady recently disfigured by her ex-boyfriend, Paul Nwokobia in Surulere Lagos.

According to her, she dated Paul for 5 years but after she broke up with him, he attacked her with acid.

Rosemary, a professional caterer who is now awaiting surgery at the Female Surgery Ward of LUTH, Idi Araba said the incident happened on the 3rd of June around 8pm.

She narrated the story to police officials from Itire Police Division who visited her at the hospital.

“I was at work one day when a private number called me around 4pm.
The caller was a lady. She said she wanted me to bake cake for her. She said she would call back in the evening.” According to her, the woman called around 8:30pm and told Nanaifa to meet her at Surulere. She said she would be in a red car. She said: “I was wearing a red blouse too. When I got to the spot, I did not see any red car and she was not calling back. Suddenly, I noticed someone drew my hair from behind and suddenly poured acid on my face down to my waist.” As she felt the debilitating pains, she fell to the ground, screaming in pains.

. “When it happened, I couldn’t see very well, but I’m sure it was a man. The man fled the area immediately.”I didn’t know his plans. I left him because he did not have a stable job and he wasn’t honest. I decided to move on with my life.”

Rosemary said her family members had spent close to N200,000 for her treatment.

Her elder brother, Eric Nanaifa who reported the matter to police led them to the house of the suspect.

The suspect and 3 of his accomplices had been arrested and taken to SCID in Panti Yaba in connection to the acid attack.