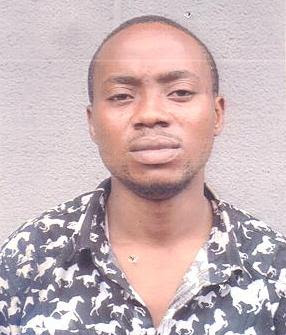 A 28-year-old kidnapper has been arrested in Kano state for allegedly threatening a business woman in Lagos.

The suspect Joshua Abiodun was said to have gotten his victim’s telephone number from a receipt he received from her shop in Lagos and since then, he has been sending life threatening messages to her.

He also told her to pay N44million and failure to do so will result in him killing her and her kids.

Abiodun gave his victim the details of his Kano State First Bank account to pay the requested ransom.

The victim, Omolewa Aigbogun Oseni fearing for her life reported the threat to the DPO in charge of Lion Building Division, CSP Folashade Tanaruno and was advised to play along and pay a bait into his account.

CSP Tanaruno also alerted the bank management of the development.

The suspect was nabbed when he travelled from Lagos to Kano to withdraw the sum from his bank account.

He was apprehended by the bank officials on police instruction. Kano State Police Command contacted CSP Tanaruno who sent her men to Kano to bring the suspect back to Lagos.

During interrogation, the suspect who allegedly owned up to the crime said he got the victim’s number from the receipt she issued to him when he bought hair extension at her shop in Lagos.

The suspect who hails from Ilesha in Osun State was today arraigned before an Igbosere Magistrates Court.

He was admitted on N2million bail with 2 sureties in like sum.

The suspect was taken to Ikoyi Prison pending when he will fulfill his bail conditions.

He is expected to return to court on November 22nd 2016 for trial.