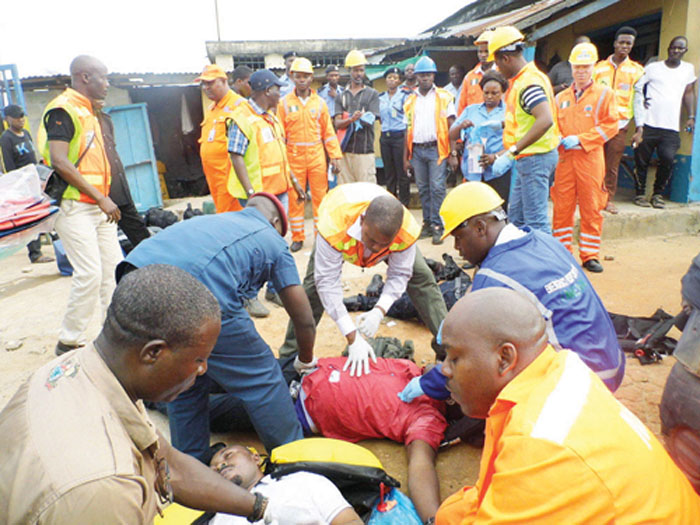 The identities of the lucky survivors of Lagos Chopper crash has been revealed. According to local rescue workers, those who survived the crash were male and they are Solomon Ude, Joshua Emekanma, Chukwudi Onah, Dolu Ebiejuara, Iniala Paimi and Onoriode Ojiete.

See exclusive report by The Nation on how the crash happened yesterday:

4 passengers died yesterday when a Bristow Helicopters chopper plunged into the Lagos Lagoon.

On board were 12 people, including two crew members.

Six others, who were injured, were rescued from the scene of the crash, which was still being combed late yesterday for the two missing persons.

The chopper, marked 5N – BDG – 760540, was flying from an oil rig between Ondo and Lagos states, with contractors of a dredging company, Indigo, who were returning to base.

The incident occurred at about 3:10pm at Oworonsoki.

Eyewitnesses said they saw the chopper spinning before nose-diving 900 metres from the shore.

The victims, The Nation gathered, had spent two weeks on the rig and were coming back for their two-week break, as it is the practice.

One person walked out of the crash without assistance. He was taken to the hospital on a motorcycle. The others had fractured limbs.

According to dredgers on Alonge Street, where the chopper nose-dived, the six persons rescued alive included a man who allegedly walked out of the crashed chopper, had serious injuries and was in pains.

They alleged that the co-pilot, who was among those rescued, had broken limbs and held his back, gasping for air.

The dredgers told The Nation of their efforts at rescuing the passengers before emergency agencies arrived at the scene about 45 minutes later.

Ihindu, who alleged that his divers and equipment were deployed immediately the incident occurred, said one of the rescued passengers told them there were 14 people on board, including a woman.

Recounting how the chopper came down, Ihindu said it was very fast, adding that they had noticed it flying very low.

According to him, the chopper nose-dived into the lagoon.

He said local divers recovered eight persons-seven injured and one dead- who were handed over to the police for further action.

Corroborating his story, a woman who identified herself as Ibirounke said: “We were here working when it happened. The helicopter was flying towards this direction at low height. But, suddenly it started spinning and turned on the opposite direction before going underwater.

“Our men saved all those who were alive. We rescued eight people from this side and of the eight, one died. Seven others survived though they had serious injuries and some have drunk water.

“On the other side, three other bodies were recovered, making four dead. Some of the victims who could talk told us that they work for Indigo Dredging.”

Shoes, bags, life-jackets and other personal effects of the victims recovered from the wrecked aircraft were seen within the premises of a neearby police station.

A crowd gathered last night outside the Oworonsoki police station.

In a joint situation report by LASEMA, NEMA and Fire Service, Akindele said two of the injured persons were at Afolabi Hospital. Four others were receiving treatment at the Gbagada General Hospital.

He said the bodies of the dead had been deposited at the Mainland General Hospital mortuary, adding that the rescuers could neither state the airline, nor the exact number of those onboard.

He said: “We were told that there were 12 people on board. But unless we see the manifest, we cannot confirm for sure. Right now, we are working with the alleged figure and so, are looking for two more people allegedly missing.

“At the moment, we cannot give you names of victims or the details of the aircraft because our primary concern is to save lives.

“We are deploying equipment at the moment to enable us work here all through the night until the missing persons are recovered.

“Those injured are responding to treatment at the various hospitals and we cannot be asking them questions now because they are in pains,” Akindele said.

Giving details of the crash, the Accident Investigation Bureau (AIB) said in statement through its Commissioner, Dr Felix Abali “Twelve persons were believed to be on board. There were casualties and survivors. It was a Bristow Helicopters’ chopper on approach to landing in Lagos.

A statement signed by NCAA’s spokesman Fan Ndubuoke reads : “A Bristow Helicopter, with registration number 5N – BDG – 760540 en route from one of the nation’s oil rigs has crashed at Oworonshoki in Lagos (yesterday).

“The Helicopter scheduled to arrive Lagos 15.35pm had 12 (twelve) souls on board, including the crew.However,the number of casualties is yet to be determined.

“At present, officials of the Accident Investigation Bureau (AIB), National Emergency Management Agency (NEMA) and the Nigeria Police are at the site providing rescue operation for the victims.

“While this is ongoing, further details will be communicated as appropriate.”

Speaking through his deputy, Dr. Oluranti Adebule, Ambode said the government dispatched its emergency team to the site upon hearing of the accident, adding that top officials of the government were at the site on the directive of the governor for first-hand information.

The deputy governor was also at the Gbagada General Hospital, where four of the survivors were being treated. She sympathised with the the injured passengers and assured them that they would have the best of medical care.

She told reporters after the visit that two survivors were taken to a private hospital around the site of the crash for first aid attention, noting that they would be moved to the government hospital once their condition stabilises.

“We have four of the survivors at the Gbagada General Hospital while two others are at a private hospital, Afolabi Medical Centre, where they are being attended to as a sort of first aid, pending when their condition improves and they will be transferred to the General Hospital also,” the deputy governor said.