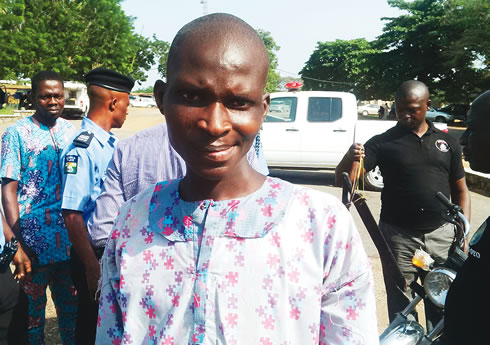 We learnt that Adeleke had served two separate jail terms and his latest arrest came a day after he completed a five-year jail term.

According to police authorities, he was released from prison on November 4, 2015 and allegedly committed robbery the following day.

While parading the suspect and others, the state Commissioner of Police, Leye Oyebade, said Adeleke was arrested during an unsuccessful robbery.

He said, “The victim, Azeez Saheed, was robbed by the suspect while returning from his farm at Abu Village via Akinmorin, Oyo. The suspect barricaded the road with logs of wood waiting for the suspect. He tried to overpower his victim by stabbing him with a broken bottle but despite his injury, the victim raised the alarm which eventually led to his arrest.”

The suspect, who said he regretted his action, confirmed that he had served two jail terms of seven years for robbery.

He explained that he was jailed for the first time in 2000.

He said after his release, he had no relatives to assist him financially and he had no other option but to return to his old ways.

“I spent five years in prison and I was just released. However, I was hungry after leaving prison recently. I had no relation to feed me in Oyo so I took to robbery again”, he said.

When asked why he had no relatives, the suspect said, “I was born in Ibadan but someone took me and my siblings to Oyo town when I was seven. We grew up with her because she refused to take us back to our real parents,” he said.

The suspect said he was in his early 20s when he was first sentenced for robbery.

“I stole shirts and money and it earned me two years in jail. In 2000, I robbed a motorcyclist and got arrested. I was put behind bars for the offence in Oyo. I feel sad,” he said.