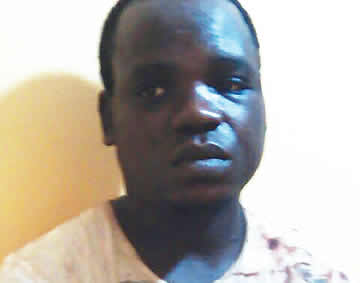 Meet Rafiu Gbadamosi, a 26-year-old young man who allegedly stabbed his friend to death with a broken bottle in Igberen area of Ota Ogun State.

Hear what the suspect told the police:

“I was at Merit Junction with my girlfriend when I saw Yinka (Badmus) quarrelling with Ebenezer. We are all friends. I intervened and I bought alcoholic drinks which all of us drank to let peace reign. I was going to pay for the drinks when Badmus and his boys attacked me. One of them smashed a piece of brick on my head.

“I looked for a bottle and stabbed him (Badmus) in the chest and armpit and he fell. But now, I regret my action.”

An eyewitness, Alade Gboyega, said Badmus’ death was unfortunate and shocking. He added that the deceased lost much blood before they reached the hospital.

He said, “He was more or less an orphan. His mother died some years back and we don’t know his father’s whereabouts. I was shocked when he died.

“We initially took him to a private hospital, from where we were referred to the general hospital. He had lost a lot of blood before we got there.”

Ogun State Police PRO, Muyiwa Adejobi said the suspect had been tranferred to SDCI in Eleweran for Criminal Investigation.