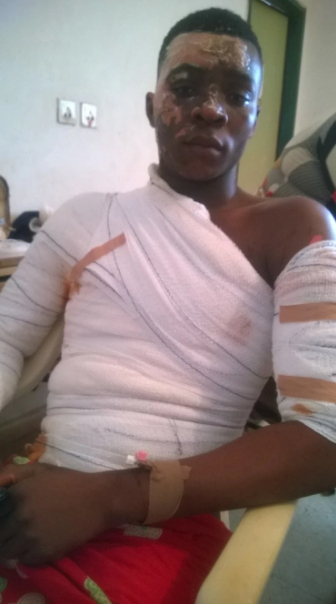 His step mum, Mrs Uzoamaka Anoke poured hot water on him at their family house in Amenu Uburu area of Ohaozara LGA of Ebonyi state because he accused her son of stealing a Techno phone.

While Anthony is at the plastic surgery ward of the hospital, Ifeanyi is at the emergency unit.

Also, property worth thousands of naira belonging to the two sides were destroyed during the clash. Trouble started shortly after Anthony’s side and that of Ifeanyi had quarrelled over missing cell phone belonging to Anthony’s sister, Ebere. Anthony and members of his siblings had accused Ifeanyi of stealing the phone which the man denied, leading to misunderstanding between the two sides.

Photo: 6 Nigerian Doctors From Ekiti Die In Fatal Accident In Kaduna On Their Way To Sokoto
Photo: UNILAG Student Stabbed To Death By Housewife While Settling Fight In Ajah Lagos