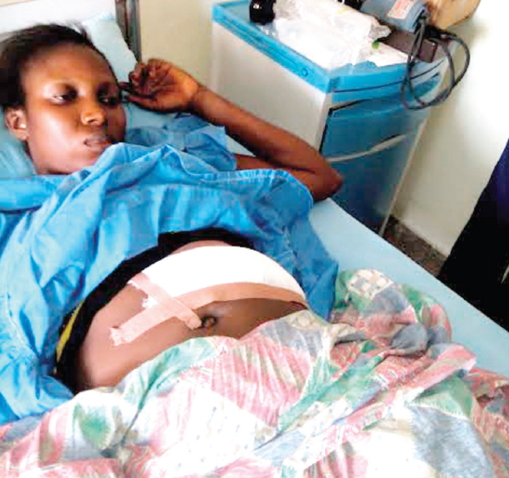 Mrs. Nkechi Aforbaze, an Office Technology and Management graduate of the Auchi Polythenic who has been diagnosed with kidney cancer, is seeking the sum of N2 million to access five courses of chemotherapy prescribed to save her from the cancer burden.

To this end, the thirty-year-old Aforbze who is presently an applicant has appealed to sympathetic state governments including Lagos, Delta and Edo State, among others, philanthropists and public-spirited Nigerians to help raise fund needed fund to help her complete the treatment.

According to the mother of one who resides in Lagos, her predicaments began last year with abdominal pain which prompted her to go for medical checkup at a private hospital where she was suspected to have developed kidney cancer”. I performed the surgery at Robostin Medical Centre at Surulere on the January 6, 2015.

Thereafter I was referred to oncologists at the Lagos University Teaching Hospital (LUTH) in Idiaraba where the tumor was removed and tested for the laboratory analysis. It proved cancerous and since then, “I have been placed on drugs.”

Oncologists in LUTH conducting the treatment, have further prescribed six courses of chemothepy, that would be administered with a drug called Avastin. This drug costs N458,000 per course. Each course of the chemotherapy will be taken at three weeks interval.

In a letter on behalf of Aforbaze with Hospital No: 646314 issued from the Consultant Radiation Oncologist in LUTH, Dr. Olatunji who is managing the case of Aforbaze, dated March 26, 2015, the cancer specialist confirmed that, “Patient is scheduled to commence immunotherapy (Alpha interon day 1, 3 and 5 respectively) targeted therapy with IV and radiotherapy to Nephrectomy bed.”

Although these drugs were prescribed since January 6, after four months of delay in the takeoff of the treatment, “some churches and kind Nigerians helped me to raise money which I used to access the first course of the chemotherapy that had been administered on me.” She added that the total money I need now to complete to complete the chemotherapy treatment is N2 million.

“This appeal is to generate money for this particular treatment because I cannot afford it. I beg government and Nigerians to come to my aid. My Bank account number is: Egbo Nkechi, 2009386613 Zenith Bank.