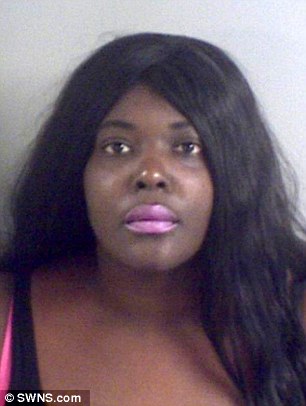 A music graduate with absolutely no medical background was given work as a doctor in a prison and a GP’s surgery after stealing the identity of a fully-qualified doctor who had the same first name.
Oluwadamilola Opemuyi treated no fewer than 91 patients before being ousted as a fraudster.

Applying for a position at a surgery in Southend, she told the practice manager that both of her parents were doctors. When asked where she saw herself in five years time, she replied by saying she may retrain as a brain surgeon. She was not offered a job.
In January, Middlesex based agency Meddoc Locums were duped by her bogus documents, taking her word that she was a doctor and hiring her for jobs around Britain.

She was given a position working at Elmley Prison in Kent, where she’d negotiated a fee of £500-a-day. She’d previously asked elsewhere for £2,000-an-hour.

Working across both HMP Elmley and HMP Swaleside – where GP services are provided by Minster Medical Group – Opemuyi treated dozens of inmates, despite having no clue about the medical profession.
Before time, however, both prisons received complaints about her work. When she bypassed prison protocols by increasing an inmate’s opiate-based drug, her contract was terminated.

However, days later she turned up at Elmley’s healthcare wing once again. Prison officers told her to leave immediately.
Despite this, bosses at Meddoc Locums chose to give her another chance, and soon she was offered a day’s work at a GP’s surgery in Essex.
In that single shift she saw 21 patients, even issuing a death certificate at a care home.
She then worked at a health centre in Liverpool, where she dealt with another 25 patients. At a second surgery in the city she saw a further 25, two of them on home visits.
However, after more complaints about Opemuyi’s work, Meddoc opted to cut ties and offered her no more work.

The ‘delusional’ fraudster – whose father is a gynaecologist and mother a paediatrician – was eventually caught out when she presented two forged prescriptions at Boots chemist in Maidstone.

When arrested, she declared: ‘I am a doctor and I wrote them myself.’
Opemuyi today admitted her guilt to four offences of fraud, two of possessing false identity documents and three of forgery – moments before she was due to stand trial.

Maidstone Crown Court heard that the University of West London music, technology and public relations graduate duped agencies into getting her work by assuming the identity of a fully qualified doctor and using false documents.

Prosecutor Ryan Richter said Opemuyi set out on her criminal course after failing in her bid to become registered with the General Medical Council (GMC) in December.

After telling the regulatory body that she was thinking of doing a master’s degree in mental health, the council informed her that qualification alone would not be sufficient, and that she’d have to complete five years at medical school during which it was required for her to obtain degrees in medicine and surgery.
It was on the back of this rejection that her fraudulent activities began.
‘She was to use Dr Adeyo’s GMC registration number, utilising the similarity in their names as part of her deception of a number of agencies,’ said Mr Richter.
‘Miss Opemuyi conducted a brazen, sustained and intelligent campaign of forgery and fraud in order to obtain employment in a specialist profession in which the public place the highest degree of trust, when she was without appropriate training or experience.’

As well as a fake GMC registration certificate, Opemuyi was also presenting a forged driving licence, passport and marriage certificate – all of which she used when telling one employment agency she’d been offered a job paying £450,000-a-year.

Mr Richter said the total amount she defrauded was £8,916 and she was jailed this morning for two years and four months.
After sentencing, police inspector Ivan Beasley said: ‘These were very serious offences committed by a woman who went to great lengths to gain employment as a doctor despite not having the necessary qualifications to do so.

‘In total she treated 91 patients, all of whom have since been contacted by the NHS. They will no doubt have been alarmed and concerned to hear of Opemuyi’s actions, as was the legitimate doctor whose identity she stole in order to commit her crimes.
‘This was a complex investigation and I would like to pay tribute to my team of officers who worked extremely hard to get to the bottom of the case and bring Opemuyi to justice.’