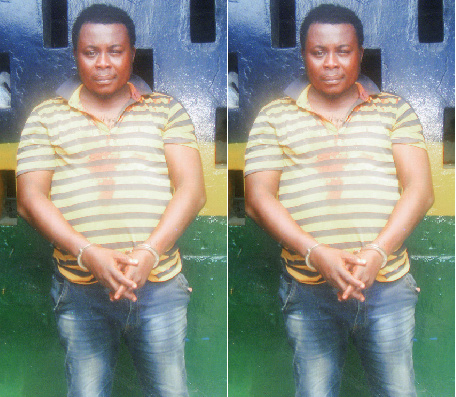 Special Anti-Robbery Squad (SARS) Detectives in Ikeja, Lagos have arrested a man who specialised in defrauding unsuspecting Nigerians, using fake bank alerts. The suspect, simply identified as Asomba, 35, was described by police as “a notorious criminal”.

According to police, Asomba jumped bail two years ago without a trace before he was arrested again on November 30. Police said that in 2013, he defrauded a victim of millions of naira, using fake alert. He was charged to Agbo-Malu Magistrates’ Court 3, Apapa Road.

He was granted bail with three sureties, but jumped bail. He was arrested again in November after he defrauded one Moses Adebayo of N9 million and another trader at Okokomaiko of N4 million through similar way. Asomba was said to have gone to the warehouse of one Adebayo at Alaba International Market.

Adebayo is a major distributor of Nigerchin Development Company’s products.
The suspect placed an order for cables worth N9.5 million and later sent a fraudulent bank alert to Adebayo, making the trader to believe that his account had been credited. A police source said: “After loading the goods into the truck he brought, the suspect did not pay. He said he was in a hurry and left.

Before the close of that day, the victim received alert of N9.5 million from his bank, United Bank for Africa (UBA) and confirmed payment. The suspect soon called the owner of the goods, asking if he had been alerted.” It was only after Adebayo received the alert, that he allowed the truck to leave the company’s premises.

The grateful trader gave the suspect’s supposed workers N50,000 for transport expenses, with an appeal that they should continue to patronise his company. The police source added: “The matter took a different dimension when trader went to the bank a few days later to verify the money paid into his account by his customer. He was told that no money was paid. The bank said it was called ‘magic alert.’

“The matter was reported at SARS. While the detectives were hunting for him, the suspect went to the warehouse of another trader at Okokomaiko to buy iron worth N4 million.

He also paid them via internet banking, using fake bank alert.” He was later arrested through his girlfriend living at Egbeda area of Lagos. Asomba confessed to the crime, promising to pay the money.

When contacted, the state Police Public Relations Officer (PPRO), DSP Joe Offor, said the suspect would be charged to court soon. He warned businessmen to be wary of people they transact business with.