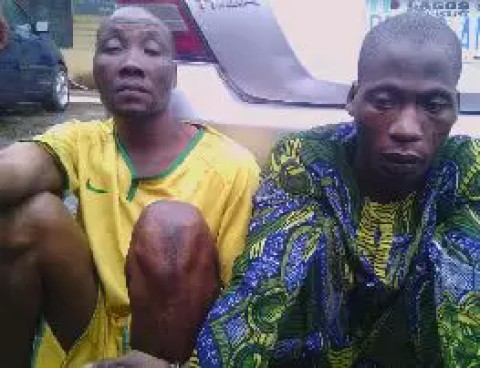 It was payback time for a two-man robbery gang which specialised in raiding markets in Lagos and dispossessing traders of their wares and cash, following its arrest by the Police in Lagos.

The suspects; Saidi Olalekan (32) and Joshua Akinsola (20), who claimed to be a Nigerien, were arrested at Oshodi market during a foiled attempt to rob a textile shop owner of some lace materials and cash worth N2.5 million recovered from them were stolen lace materials worth N300,000 and cash of N2 million.

During an interview with Vanguard, the suspects revealed that information on their victims were usually given by their sales representatives.

They also confessed that they use charms to hypnotise their victims, a means they said made their operation easy.

But nemesis caught up with them after one of their victims who apparently was not affected by the charms raised the alarm which led to the arrest of Akinsola, the supposed Nigerien.

32-year-old Olalekan, an indigene of Ogun state who recently completed a two-year-jail term, said: “We do not use any gun or dangerous weapon during operation.

What we used was a charm called atare and ohun. This charm was prepared by a herbalists in Apapa. That is what most 419 people use.

“Any time we were going for operation, we would put the charm in our mouth and another in the pocket.

We would thereafter, enter any of the shops and order anyone there to bring the proceed for the day. We would also command them to bring as much yards of material they could lay their hands on.

They will obey without complaining. Also, no customer will come to that shop as long as we remained there. After the raid, we would quietly leave the shop. Our victims usually regain consciousness several hours later.

“At the end of each operation, we would take the stolen materials far away from where we stole them and sell them at give away prices. For instance, if we steal material from Idumota , we will take it to Agege or even Sango in Ogun state to sell and share whatever was realised equally.”

My victim had a counter-charm

On his part, his alleged partner in crime, Joshua Akinsola, disclosed that they usually get information either from sales representatives of their victims, their managers or relatives.

Oshodi operation and counter-charm
On the Oshodi botched operation, he said his victim apparently had an antidote to charms that gave them away.

He said: “While Olalekan was in one of the shops, I was in another. He succeeded in carrying some wares and N2 million cash from his victim.

But I realised that after making some incantations with the charms in my mouth and pocket, my victims did not succumb, and had I left the shop with some lace materials than they raised the alarm which attracted other traders at Oshodi.

“Before I knew it, some policemen arrived the scene and whisked me away. I led them to my colleague where the stolen N2 million was recovered. I am from Niger Republic but I live at Ogolo, around Benin Republic.”

The suspects according to the Lagos State Commissioner of Police, Mr Fatai Owoseni, will be charged to court soon.