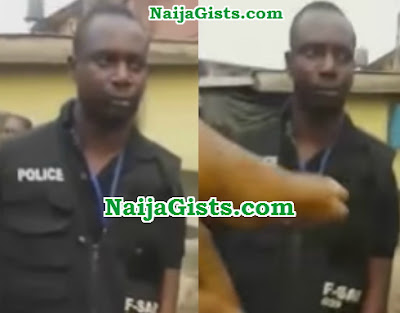 Meet the criminal in uniform who allegedly led his men to rob a trailer at gunpoint in Sagamu Ogun State on Saturday.

The 4 policemen led by Inspector Durojaiye Taiwo stopped a trailer around midnight on Saturday, they diverted the trailer to Okokomaiko area of Lagos and sold the content for 30 million naira.

Unknown to them, the trailer had a tracker.

The leader of the FSARS for the robbery , Inspector Durojaiye Taiwo and two other members of the team escaped, while Victor is being detained in FSARS cell in Ikeja. Victor was arrested after a gun duel with policemen attached to Okokomaiko police station.

A police source said: “The incident happened on Saturday night. Inspector Durojaiye is the leader of the team. The team is called ‘striking team.’ They all came from State Criminal Investigations Department (SCID), Panti, three months ago to join FSARS, Ikeja.

The criminals tied the trailer driver and his conductor and bundled them inside their Lexus Jeep before dumping them in a bush at Ijebu Ode.

Inspector Durojaiye and 2 Policemen have disappeared while one of the suspect identified as Corporal Victor has been arrested.

Now we know police is our friend!!! God save Nigerians!