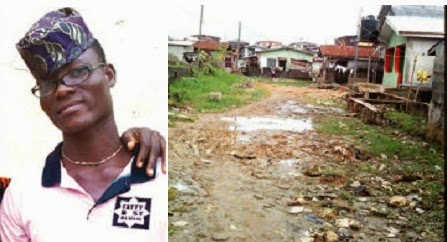 Pictured above is a gentleman identified as Tope Kadiri who met his untimely death yesterday at a Church located on Aduragbemi Street in Oworonshoki area of Lagos state Nigeria.

The fight that eventually led to his death yesterday started on Tuesday evening when he confronted a woman throwing water into the compound of a church where Kadiri had gone to visit his parents.

He politely asked the woman to stop throwing dirty water from her washing bowl into the church compound.

When the woman resisted, the deceased went to pull down some of the clothes she spread on the line and a fight started. The woman’s children were said to have risen in defence of their mother, escalating the crisis.

Read what a residence of the area told Punch:

“The fight was settled amicably by the community leaders and both sides agreed to a truce. However, on Wednesday morning, a group of boys living in the woman’s house who were away when the incident happened decided to revisit it. They attacked Kadri and that was how confusion started. He was gagged and stabbed in the chest till he died.”
A member of the Orthodox Church, Isaac Adesegha said the church had also been attacked on the night preceding the tragedy.

“They came and broke the window frames of the church and vandalised our property. One of the church members was stabbed in the neck, he could have died.
What was our offence? We asked them to stop throwing water into our compound. We share a low fence with their house and they go beyond their boundary everytime. When they turn on their generators in the night, the fumes enter the residential blocks in the church. We told them to stop, but they refused to listen.The boy that died was just on a visit to his parents who were staying in the church.”
A police source however told Punch that a man who sold foodstuff around the bus stop was attacked by Kadiri’s friends. “They clubbed him and broke his head. He would have died but for police intervention,”.

Pictured on the right above is Aduragbemi street and the church building is on the right with refuse infront of it.

The corpse of the victim had been deposited at a mortuary while the boys who murdered him had been arrested by the police.

The troublemaker madam who started the whole thing was also arrested and later released.

Offer To Upgrade WAEC, GCE & JAMB Results Online Is A Scam, Don’t Fall For It
The Powerful Mindset All Successful People Have In Common