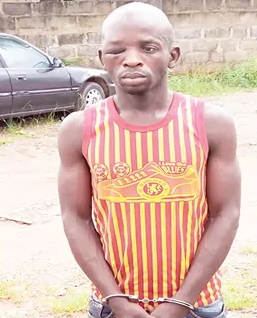 One of the kidnappers who abducted 3 landlords at Oshorun Estate in Isheri, a border community between Lagos and Ogun state on the 17th of September 2016 has been arrested.

The suspect identified as James Kegbe aka JJ was nabbed at Ore in Odigbo LGA of Ondo where he went to spend his share of the N12million collected from the victim’s family.

He told police he collected N1.2million as his share.

Kegbe also mentioned the names of other members of his gang.

According to him, Trust, John, Victor, Prince, Julius and “one senior man” were also involved in the operation.

A manhunt has been launched to arrest other members of the gang now at large.