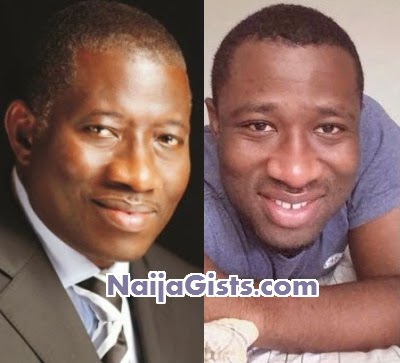 On Friday, the guy pictured above took to the net to officially identify himself as one of the illegitimate sons of President Goodluck Ebele Jonathan.

The 24-year-old guy identified as Ibime Belema Jonathan said he is a native of Nembe in Bayelsa.

He further said that his mother, a receptionist met Jonathan in an hotel in Port Harcourt in 1989 and their relationship was kept private because of the risks it posed to Goodluck’s then fledgling political career.

Ibime said he’s Jonathan’s best kept secret and that his mother told him the secret on her death bed.

Ibime has challenged President Jonathan with an offer to do DNA in order to confirm his allegations.

After a lifetime of absence, he hopes to see his dad assume fatherly role.

Why is this coming towards election time?

Alex Malarkey, Boy Who Came Back From Heaven Lied, Fake Book Pulled From Shelves
Many Mistakes Of President Goodluck Jonathan By Dele Momodu