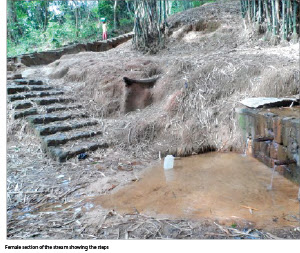 This mystery stream is located in Achina village, Aguata LGA of Anambra State.

A woman menstruating can’t go there to fetch water becasue the deity will strike her with madness.

Achina villagers are appealing to the government to come to their rescue over water scarcity in the area.

One of the villagers, Mrs Ibekwe told Oriental News the stories which are quite revealing.

Hear her: “Fetching water from this stream is not easy, but the white people tried a little for us by constructing the steps. But as you can see, they are rapidly wearing away. Old people like me are finding it difficult to climb the steps.

“The stream has two divisions – male and female. This is because there are rules based on the customs guiding it. Male section has strict, special traditions guiding it. In the olden days and till date, men of Achina take Ozo chieftaincy title, and they have special regard for it. It is a taboo for a woman in menstruation to go near him. Because of that, such a woman is forbidden to go to the male arm of the stream to fetch water. In fact, women generally are barred from going there. Any woman who violates the custom is expected to carry out some traditional rituals for cleansing otherwise she will go barren all her life. Then those who have reached menopause stand high risk of losing their sanity as that is the alternative punishment. Such violations, if they do without atonement, prevent her from fulfilling her destiny as a woman. She would consult the spiritual attendant to the deity in charge of the water who tells her what she would bring for cleansing. She’d be washed.”

Mrs Ibekwe who gave an eyewitness account of a victim (name withheld) revealed that when such people refused to go for atonement on religious grounds, their woes were doubled.

“If she disagrees to act in line with the tradition, perhaps on religious grounds, the thing (water spirits) will be disturbing her. In fact, she may eventually go mad. It has happened so many times. Once you break the rules, you must bear the severe consequences,” she said.

When Oriental News visited the stream at about 1:00p.m Miss Chinyere Ezeonuogu was waiting for a man to come to assist her fetch from the male section.

She told Oriental News that she had spent over 2 hours and was ready to return without water if no man came to her rescue..

She subsequently pleaded with this reporter to assist her.

Her words: “I have been sitting on this step for more than 2 hours waiting for a man to help me get water from the male section. This female section is not really clean and safe for drinking.”

Chinyere agreed that “women do not go to the male section of the stream. This is because they are forbidden to fetch water from there. It was said that any woman who violates that rule will go barren. But men can fetch from the female section. But as a woman, you can come with your brother who can fetch for you while you wait at the base of the step, or you wait as long as your patience can carry you until a man or boy comes around to help you.

“We find it very difficult to fetch water here. Sometimes you’ll have to fight your way through. In fact, here is more or less a wrestling ground. Some people settle their scores here. Sometimes after such fiasco, there would be pieces of broken gallons. You know, while struggling to gain access to the water, heavy fight could ensue. If after waiting for so long without any man to fetch it for me, I’ll simply go home and come the next day.

“Again, it is very strenuous fetching water from this stream. It is a day’s job on its own. One feels weak and sleepy after climbing these long steps. You’ll feel very weak because all your bones and muscles must have worn out climbing the long steps.”

Hear him: “Ezeokoro stream is the only water the people of Achina can boast of. It is very clean and delightful to drink. That was why a group from America called Operation Crossroads Africa, during the late colonial era visited the stream and subsequently constructed a long staircase numbering 245 to aid easy movement down the valley. People from other backgrounds also come here to fetch the water. I remember a certain professor from the University of Nigeria, Nsukka who used to come here all the way from Enugu State to fetch the water. He comes with many gallons. For instance, my son-in-law, a commander in the Nigerian Navy came here last Christmas with his family to spend the festive period with me. He visited the stream and the first scene he met was some students of St. Peter’s Special Science School fighting. He went there with a 40-litre container and took the water to Port Harcourt where he analysed the water. He was shocked that it as as pure as the water was, the government has not seen the need to put it to the best use for the benefit of Achina people and the environ. He said it was the best spring water he had ever seen.”

Ezeoba who explained that “the division of the water into two sections was based on culture of the people of Achina designed to accommodate women who are weaker sex as they would not be able to fight over the limited supply of the water,” however, agreed that several victims have fallen for violating the custom.

“From time immemorial, this town has been respected for its protection of the women folk. They recognized that women are just weaker sex. So to protect the women, they ensured that one section of the stream was preserved for the exclusive use of the women and the other for the exclusive use of the men. But to ensure compliance to that, they attributed that order to Ezeokoro deity because if they had allowed men and women to fight over the limited supply of that water, women might not be able to fetch it at all,” he explained.

When asked about the repercussions if a woman goes to the male section he said: “Well, there would be sanctions. Her fellow women will go to her to collect some stipulated fines and ask her to make some sacrifice. O yes! If the woman is under menstruation, she is restricted to go there to avoid spoiling the spring water; you don’t wash clothes there.

“If a woman violates the order and runs mad, that’s her own cup of tea. The spiritual aspects of that stream affects her and the people will see it and say that she is mad because she violated the order of the stream. It is spiritual, so you can’t explain it. It has happened several times; you can’t number that. Many things can happen to any woman who violates that rule. That is where the spirituality comes in. Ezeokoro is a deity.”

Therefore, a cross section of the Achina community people who spoke to Oriental News pleaded with the government to come to their aid as the scarcity of water in the area has brought untold hardship to them.

They also want the government to develop the stream to become a tourist site given its natural serenity and landscape.