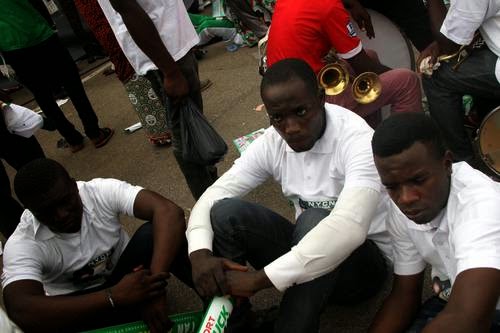 President Jonathan and his cabal have shown Nigerians that they will do anything to occupy Aso Rock for the next four years.

Yesterday, the Eagle Square in Abuja was filled to the brim with supporters hired to make face for the failed politician in a bid to prove to Nigerians that his popularity is on the rise.

According to Sahara Reporters, Over 1000 supporters rented to converge at the event yesterday protested non payment of their N2000 per head fees and the nonchalant attitude of the leaders who hired them from Maraba area of Abuja.

One of the protesters said some PDP leaders brought people from different part of Abuja to join the rally at Eagle Square with the promise of N2000 per head but at the end of the day, nobody paid them.

“They asked us to enter the bus when they came to Maraba this morning and they promised to give us two thousand Naira each and also give us food but we are very disappointed to see them running around and later disappear into the middle of the crowd and nobody come back to give any money or bring water for us to drink.”

Is this not the same PDP politician accusing APC of hiring supporters?