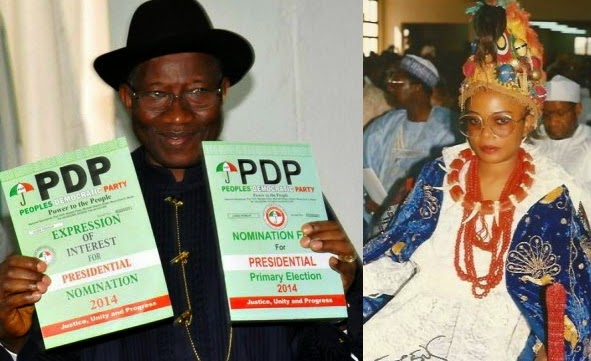 The wife of late businessman, Chief MKO Abiola just filed a lawsuit before a Federal High Court in Abuja in opposition to the party’s decision to make Jonathan the sole candidate for 2015 Presidential election.

In the suit with number FHC/ABJ/CS/836/14, and in which she joined the Independent National Electoral Commission, INEC, she is seeking a perpetual injunction barring the PDP from holding the presidential primary election.

She is also seeking the court to bar INEC from recognising President Goodluck Jonathan as the party’s candidate with an argument that the party had failed to meet electoral requirements as stipulated in its own constitution as well as the country’s Electoral Act.

Jonathan, on Tuesday declared his interest to re-contest the position of president on the platform of the PDP.

Mrs. Abiola, in an affidavit however said she was disgraced by the party’s actions, adding that, upon issuance of the receipt by the party, she met with the party’s National Organising Secretary, who congratulated her and asked her to return on 28 October 2014 to meet the National Chairman for an official hand over the Expression of Interest Form.

She said when she got to the party’s headquarters on the said date, security agents at the entrance refused her into the secretariat and, rather, became hostile to her and her supporters.

When she eventually gained entrance into the secretariat, she said: “I met the National Chairman of the first defendant (the PDP) in his office amidst some governors, who in turn directed me to meet the National Secretary of the party to give me the Expression of Interest Form.

“When I met the National Secretary of the PDP, he informed me that the party did not have any Expression of Interest Form to give to me…he further informed me that the PDP had printed only one Expression of Interest Form, which I demanded that he gave to me since I was the only person that had paid for the form as at that time.

“The National Secretary expressly told me that the sole form available was meant for President Goodluck Jonathan only, who has been adopted by the National Working Committee and the Board of Trustees of the first defendant as the sole/consensus candidate of the party.”

She said when she protested against the discriminatory nature of the policy and demanded the Expression of Interest Form she had paid for, the National Secretary “bluntly asked me to go back to the office of the National Chairman of the first defendant and ask him to give me the Form.”

She said when she again met Adamu Mu’azu, the latter confirmed that the only form available was meant for President Jonathan.

She added that upon learning that a date had been scheduled for the collection of the form, she went to the party headquarters where the National Secretary again told her to go and get the form from the source of her information.

Duke said PDP had breached section 50(1) of its constitution and Section 87(1), Section (9) of the Electoral Act 2010 as well as other sections of both laws.

Apart from Duke Abiola, 3 other high ranking PDP members are suing the leading party over the same issue.

This has never been recorded in the history of Nigeria. Where are the Human Rights activists????