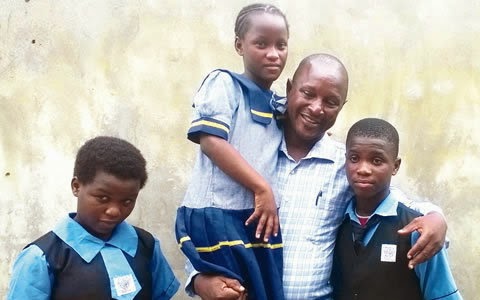 The story of a run-away father who abandoned his 3 children at a boarding school in Ogun state made headline last week after Metro reported it.

Last week Friday, Segun Adepegba reunites with his 3 children, Titi Seun and Seyi and apologized for abandoning them.

It was a happy ending for the 3 school children on Friday when their father showed up at their boarding school in Abule Iroko area of Ado Odo Ota LGA of Ogun state.

He apologized to his children and promised never to abandon them again. He also promised to look for their mother, Ruth Okochi who hailed from Ogwashi Uku in Aniocha South LGA of Delta State.

He said Ruth Okochi used to live in Abuja.

This is what Mr Adepegba told his children:

“I am sorry for leaving you, Titi, Seun and Seyi. I am really very sorry. I have missed you all so much. I will not leave you again.”

“I know a place your mother lives in Abuja but I am not sure if she still lives there. I owe it a responsibility to find her for the sake of my children”.

Segun Adepegba escaped death by a whisker after a angry mob threatened to attack him for abandoning his children.

14 year old Seun, 13-year-old Titilola and 10-year-old Seyi were abandoned by their father in 2006 due to his inability to take care of them after his wife left him.

We hope their mother is still alive because no mother in her right mind will abandon her children.

Watch the reunion video produced by Punch below