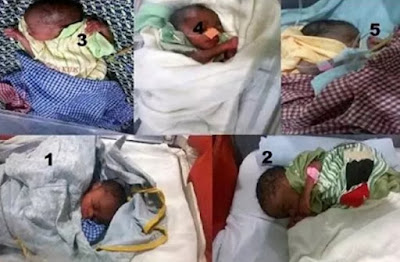 What others consider as a natural blessing has now appeared to have become a curse to a 32-year-old Alfa Yusuf Rasaq Ewenje, whose 28-year-old wife Sakirat Rasaq gave birth to quintuplets on Monday at the University College Hospital (UCH), Ibadan.

The wife, who was in purdah, was at exactly 8.45 a.m delivered of the five babies: three males and two females at the Oyo State Special-Care Baby Unit of the hospital.
‎
Mrs Sakirat had earlier been referred to the UCH from Adeoyo Hospital, Ibadan, after being placed on bed rest since the pregnancy was three months old.

“We first got wind of the blessing from Allah when she had a scan at three months. At that point, we knew she was having five babies in her tommy.

The management at Adeoyo later referred us to the UCH for adequate medical attention because of my wife’s condition.”

The couple seeking for help didn’t release their banking information or contact details as at the time of this report.