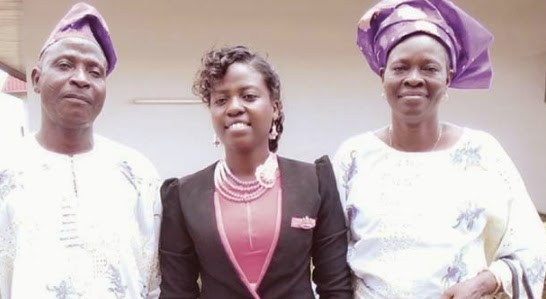 22-year-old Miss Adetayo Adeyemo, who hails from Oyo East LGA of Oyo State, was the cynosure of all eyes at the recent induction of 19 physiotherapy graduands trained by the College of Medi­cine, University of Ibadan into the physiotherapy profession.

She emerged as the best graduating student in the Department of Physiotherapy among the five students that graduated with first class honours, comprising one male and four fe­male.

Miss Ad­eyemo, spoke on the secret of her success.

According to her, “Actually, the first thing I would like to say is that it was God. I could not have made it and I don’t know how I would have made it if not for God; that was the first factor. Then, the second factor has to do with motivations from parents, family and friends. I am an advocate of excellence. I wanted excel­lence and I went for it. This was made possible by God. I am a child of God and I believe so much in God. When I was on campus, I was committed to my books, fellowship and I served God the way He wanted me to. I am a Baptist. But I attended UCH Christian Fellow­ship. At one time, I was the Evangelism Secre­tary and at another time a Sisters’ Leader. My dad is a quantity surveyor and my mummy a retired vice principal of a school.”

“I am to proceed on internship now. Thereafter, God will take charge of my next move in life.”

Adetayo’s mother, Mrs. Juliana Adeyemo, could not hide her joy, saying: “I feel highly elated and I return all glory to God because it is not our own making. It is the making of God. It is God that has granted our baby the grace to go though the course and excel. It is our prayer that God will use this as a stepping stone for her to greater things in life.”

According to her, Adetayo has been a me­ticulous person from childhood. She explained that her daughter has been highly dedicated since she was in Nursery One. “Adetayo is very religious and she has her backing in God. She is the last child of the family of four chil­dren,” she said.

Mrs. Adeyemo disclosed that the first and second children of the family are currently Ph.D students abroad and in Nigeria, studying Chemistry and Animal Science respectively. The third child, she disclosed, is a medical laboratory scientist, who is currently serving as a youth corps member in Kwara State.

She also described her husband, Mr. Ade­bayo Adeyemo, as a disciplinarian, who would not spare the rod to spoil the child. The family, she said, worshipped at the Ebenezer Baptist Church, Jabata in Oyo town.