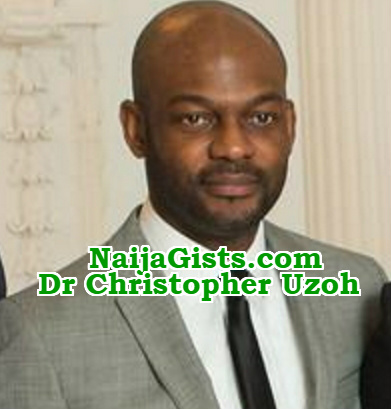 An experienced Nigerian physician who is just about to relocate to Toronto Canada has been suspended from his job in the UK after he allegedly sent unsolicited flirty messages to a female patient.

In a series of love confession SMS, Dr Chizoba Christopher Uzoh aka Chris Uzzi sent between March and May of last year, he said:

The female patient who obviously got enough replied him with:

At a point he sent flowers accompanied with love cards to her address with a note where he described himself as an handsome guy with huge earning potential.

At this point, the patient reported him to NHS England who  later summoned him and gave him 12 months suspension.

Dr Chris Uzoh who graduated from UI with Bachelor of Medicine, Bachelor of Surgery (MBBS), Medicine and Surgery in 2002 is happily married with two adorable kids, a boy and a girl. His wife and children are based in Toronto.

The 40-year-old doctor is the author of one of Amazon bestsellers fiction novel “The Sectarist: The Next Era”.

It is obvious he wanted to use his position to take advantage of one of his female patients.

Hopefully “Dr Chris the lover boy” has learnt his lessons.