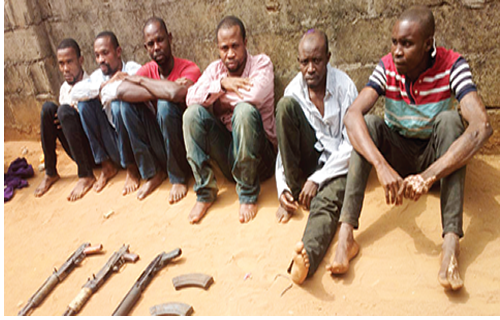 Police has caught up with 5 suspected kidnappers who, over the years, have randomly abducted residents of Imo and Abia states. Unlike most of the kidnap cases that rely on information, this set believes that it is safer to comb the area and pick victims based on their financial status. 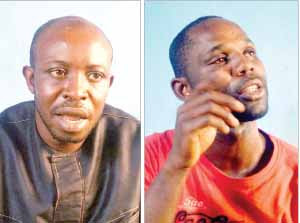 It was gathered that the detectives acted on intelligence report shortly after they released their latest victim, a South-Africa based businessman. The officer in charge of the SIRT, CSP Abba Kyari was said to have deployed detectives from Abuja to Owerri, the Imo state capital, from where they tracked and arrested five members of the gang.

In the course of investigations, it was revealed that the gang coordinated most of their operations with the help of their members inside Owerri prison.

The current leader of the gang, Ugochukwu, aged 33 was picked up in-front of Owerri prison shortly after he had gone there to give their members update on their activities while others were picked in Imo, Anambra and Abia states.

Two AK47rifles, 2 magazines with 52 rounds of live ammunition, one Beretta pistol and one pump action gun were also recovered from their amoury in Umuakpala village in Abia state. They also discovered their hideouts in Mbaise and Egbu in Owerri North, all in Imo state.

The leader of the gang, Ugochukwu, at the police station confessed that it was when all efforts to make a decent living failed, he went into crime.

“I am a native of Ezinihitte, Mbaise, Imo state and as the only son of my mother, expectations were high. I am from a polygamous home that was never peaceful and I was determined to save my mother and sisters from poverty. My father was busy getting married and producing children without providing for them.

“In 2012, I travelled to Angola in search of greener pastures but was deported. They said that I did not have up to N1million in my account. In fact, it was the Igbo community that conspired against me. They said that if I did not have enough money, I would likely commit crime. I genuinely wanted to do business there but they refused.

“Back in Nigeria, I was dead broke and since all my efforts to live a good life were frustrated, I decided to survive by any possible means. I contacted my closest friend, Richard who had pleaded with me severally to join forces with him in car snatching and kidnapping. He sells cars and 80% of the cars were stolen. When I accepted to work with him, he advised that we should return to Owerri because kidnapping in Lagos is mostly through information. He advised it would be safer to reduce the number of people involved and that most informants are easily traced by the Police.”

Back home, Ugochukwu refused to accept the role that he was given because he didn’t want his family to suspect that he was into crime.

“My initial duty was to stay in the bush with victims but I refused because as a married man, I wondered, what would I tell my family as reason for switching off my phone. I ended up picking the simplest job which was to sell the stolen cars. I did that severally and was given my share.

I was able to save enough money to buy a Lexus SUV and show it off to my family and friends in Lagos and Mbaise that I was doing well. My father’s other wives and their children were envious of my progress and started planning evil against me.

“One of my friends, based in Lagos, Ade asked if I could help him buy cheap cars. I told him boldly that the only cheap cars in Nigeria are stolen cars, and if he was interested, I would make arrangements for him to get one. He further confirmed to me that he was reliable when he gave me a pump action gun as an advance.

In this business, such a thing as gift is priceless. I told the gang in Owerri of my specification, Lexus 330 and they got it in less than two days. I warned him to remove the tracking device but he was careless and the owners traced the car to Lagos and he was arrested.

“I would have been arrested but my source in Lagos alerted me as soon as he was arrested. I went underground until I got the information that he had settled the matter. In this business, as long as the robbers are not in police net, the buyer can deny that he does not know that the car was stolen.”

During the short period of hiding, others were arrested including Richard and sent to Owerri prison. “Richard is my mentor and I cannot afford to abandon him because he was arrested and in prison. I knew that he would surely come out one day or I would be arrested and sent to that prison.

If I do not behave well here, they will deal with me if I step into that prison. He contacted me on phone and asked me to take over the leadership of the gang. I visited him in prison and assured him of my loyalty. He was the one who taught me a lot of things. We did a lot of jobs and his share was sent to him in prison. I had gone to see him after the most recent job when the police arrested me.”

On how their victims are picked, Ugochukwu said that they would just pick anyone who appear rich.

“We call it combing. Once it is a little bit dark, we will start driving around Owerri looking for a victim. We look out for flashy cars and trail the person to a safe point. The first job I did involved woman who was driving a Toyota Highlander along MCC/Uratta Road. The money from that job was the amount I sold the car. I took the car to Umuahia in Abia state where it was sold for N300, 000.

“I was still waiting to collect the money for the car when my boys called insisting that they would release the woman. They said they could only get N17,000 from her and that her husband who is a pensioner could not raise any money. It was when they told me that she is a teacher and that governor Rochas Okorocha owed them that I told them to release the woman.

“I continued to organise things in Owerri till Richard called me from prison. He lamented that times are hard in the prison and that he urgently needed my assistance. He needed money to pay his lawyers. He pleaded that I should join forces with some specialists from Aba. Initially I was reluctant because I was scared that police wanted to use Richard to arrest me. I ignored him for some weeks until I received a call when I was praying. I was praying with my family one morning and I got a call from Onyema. I told him that I would call him back as soon as I was done with prayers.

“Initially, I was disappointed when they told me that it was the same combing. They assured me that it would be a huge success, that they only needed my car. On January 7, 2016, we were patrolling that MCC road, close to Toronto roundabout in Owerri. We spotted a man with an exotic car and followed him till he got to the gate of his house. As soon as he stopped and was waiting for someone to open the gate, we overpowered him and took over the car while I drove mine. His wife saw us and we simply told her to keep her phone close. I wanted to take over the car but I discovered that it had a tracking device. We abandoned the car and used my own.

“We took him to Udochukwu’s house which is my village, where he spent three days before his family was able to raise N1million. After getting my own share of the loot, I asked my wife to cook Rice and Stew that I wanted to go and visit a relative who is in the prison. It was during the visit that police arrested me.

“It was when they arrested me that I realized that God was actually warning me to stop crime, that was why he allowed Onyema to call me while I was praying with my family. I was destined to be a pastor; it’s just that I have not accepted my calling. Come to the police cell, you will notice that all the inmates are gradually giving their lives to Christ.”

Another suspect, Kenneth Levi confessed that apart from his quest to make more money, he was convinced to go into active kidnapping to raise money for his friends who are in the prison.

“I am a native of Osisioma Ngwa in Abia State. I never had the opportunity to further my education and as the only surviving son of my father, I had to live up to expectation. With the little money my father could gather for me I opened a pharmacy. I did well untill fire gutted the shop in 2010. During those days I had friends who were into bad things and they ended up in prison. They are Chima and Obinna and they are still in prison at the moment.

They are my village brothers and were arrested over car snatching.
“They were my friends and when the going was good, they gave me part of the proceeds from theft. I knew what they were doing but I was not inspired to join them until they were arrested. I visited them severally in the prison, and they told me about an inmate who had made so much money through KP (kidnapping).

They pleaded with me to help them because the reason why they have overstayed in prison was because they did not have enough money to pay their lawyer.

“I even spoke with their lawyer who assured me that if he gets enough money, he could convince the magistrate to grant them bail. I was introduced to one Richard who was also in prison, he was the one who explained to me how best to go about it and the location of AK47 rifle in Aba. Richard is highly connected with enough links with criminals in Aba and Owerri. I also had no choice but to start because if those inmates can make call from prison, they can also reach out to the police and tell them that I am one of them.”

All set for work, Levi was also advised on the need to link up with Ugochukwu who is a professional but does not have enough arms. “Richard linked me up with Onyema, Chimakpa and Prince who are still awaiting trial. We did enough of kidnapping in Aba but the result was not so wonderful.

Richard advised me to link up with Ugochukwu whom he personally trained while in Lagos.
Just as he predicted, we did a lot of kidnapping in Imo state except for few times that the police busted us.

In one of the cases, policemen confiscated my car and in an attempt to recover it, I reported to the nearest police station and they alerted the Anti-Kidnapping department which detained me. I kept denying and praying that none of my gang members should be arrested. When they got tired of detaining me, they released me and handed the car over to me.”

On his arrest, he said. “I was in my house when one of my friends called me asking for where he could buy bullets, I was about to collect the money when police arrested me. Apart from my personal need, I also did it to help those in prison. If I end up in prison others will help me. ”

Continue Reading
You may also like...
Related Topics:imo state, kidnappers