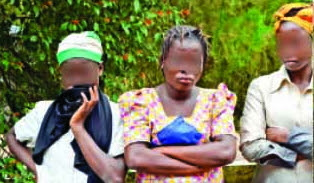 A white garment prophetess has been arrested in Ogun State for allegedly turning her church into a prostitution center.

The 54-year-old suspect identified as Idowu Olupinla who allegedly turned the place of worship into a sin house is now regretting her action in detention.

Credible church insiders alleged that the suspect formed a prostitution ring with young female members of her church who carry out their daily operation from the church premises.

Olupinla was exposed by residents who reported their daughters were missing at Ijoko Ota area of Ogun state.

According to Police investigation, the girls allegedly engaged in prostitution with the connivance of the prophetess, who, it was further alleged, got her share of the money made by the girls.

Even more troubling was the revelation that male members of the church freely had sex with the girls and paid them money for the ‘special services’ rendered in the course of undergoing ‘spiritual cleansing’ prayers in the premises of the church.

To lure the girls into the ring, Iliyasu said that the prophetess told them false prophesies, and encouraged them to have sex with fee-paying male members and she would collect her share of the money.

When the girls got pregnant, Olupinla, allegedly helped them abort the babies with drugs.

She is currently in the custody of the State Criminal Investigation Department of the Ogun State Police Command, in Abeokuta.