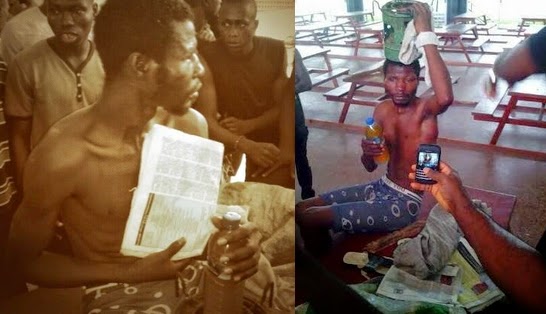 According to eyewitnesses, the guy pictured above identified as Rasaki Adedayo has been fingered as one of the Boko Haram members sent to cause havoc in Ile Ife. He was arrested yesterday while trying to set up explosives at Awolowo Hall in Obafemi Awolowo University in the ancient town.

This is coming a week after a part of the hostel was set on fire by unidentified individual.

On Sunday, Adedayo was caught red handed by a vigilant student while trying to plant the explosive.

According to his confessional statement in police detention, the man said he was trying to bomb a block in Awo hall.

Investigation is still ongoing to know if he’s the same man who bombed the hall about a week ago.

Awolowo is the most populous hostel in Obafemi Awolowo University with a maximum capacity of 2,032 legal students.

While some are calling him Boko Haram member, some others claimed he was a dropout who returned to take revenge on the innocent students. Hahahahah wonder dey plenty for this our dear country o.

Whether he be Boko Haram or a drop out, thank God he didn’t succeed in carrying out his evil mission.