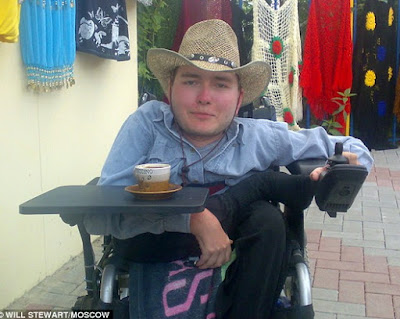 Russian Valery Spiridonov, volunteering to be the guinea pig for pioneering head transplant surgery flew to America to meet for the first time the doctor intending to give him a new body.

He will be meeting with Italian neurosurgeon Sergio Canavero in Annapolis to convince the medical establishment that his techniques are on the verge of possibility. 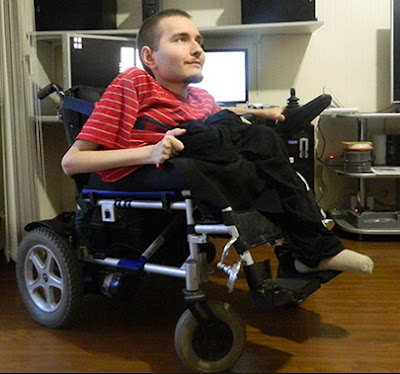 According to Daily Mail UK, Spiridonov, 30, a computer scientist from Russia, said: “My decision is final and I do not plan to change my mind.”

As a lifelong sufferer of the rare genetic Werdnig-Hoffman muscle wasting disease, he says he wants the chance of a new body before he dies.

“Am I afraid? Yes, of course I am. But it is not just very scary, but also very interesting,” said Spiridonov from his home in Vladimir, a city 120 miles east of Moscow.

“I am not in a hurry to be operated on, but if all goes according to our plan, the surgery will take place in two years from now, sometime in 2017,” he said.

The cost of the 36-hour operation, which could only be performed in one of the world’s most advanced operating theatres, has been estimated at £9.8 million.

The new body would come from a transplant donor who is brain dead but otherwise healthy. Both donor and patient would have their heads severed from their spinal cord at the same time, using an ultra-sharp blade to give a clean cut.

The patient’s head would then be placed onto the donor’s body and attached using what Canavero calls his “magic ingredient” – a glue-like substance called polyethylene glycol – to fuse the two ends of the spinal cord together. 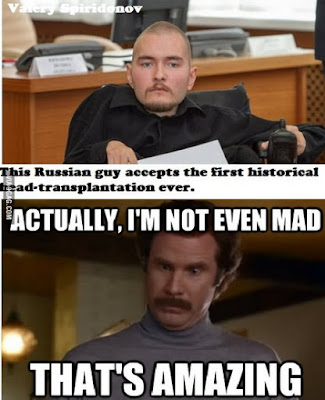 The muscles and blood supply would be stitched up, before the patient is put into a coma for four weeks to stop them from moving while the head and body heal together.
When they wake the patient should be able to move, feel their face and even speak with the same voice.

Powerful immunosuppressant drugs should stop the new body from being rejected.
Critics say Dr Canavero has simplified the difficulties involved in reattaching a spinal cord.

According to Russian Health Ministry’s chief transplant expert, Sergei Gotye: “I have no answer to the question of how to make the transplanted head control the donor body. And I am not sure Canavero has either.”

Indeed, his plans seem so unbelievable there has even been speculation that it may be an elaborate hoax.
Video game enthusiasts have suggested Canavero’s ambitions and the plot of the fifth installment of the hit game Metal Gear Solid.
But the neuro-surgeon has dismissed the claims – as has Spiridonov, who told MailOnline: “This is just nonsense.

“Dr Canavero and I are not playing games with the concepts of life and health. It is not right even to imagine such things.”
With his condition worsening each day, Spiridonov is desperate for the technique to work. He told MailOnline: “If you want something to be done, you need to participate in it. I do understand the risks of such surgery. They are multiple. We can’t even imagine what exactly can go wrong. I’m afraid that I wouldn’t live long enough to see it happen to someone else.”

He said his family fully support his decision to be the first human to undergo such surgery.
Spiridonov added: “What’s more, there’s already a lot of effort invested in this idea and that’s why it’s too late to back out.”