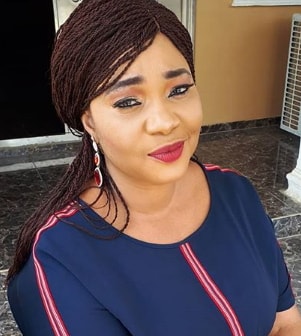 Nollywood actress Jaiye Kuti who is currently on the set of a new movie titled Iya Afin has slammed pirates tricking Nollywood movie lovers to watch wrong movies while taking credit for her work.

The actress slammed the lazy pirates for reaping from her sweat.

Uploading pictures of her sleeping on a mat, she wrote:

“I was indeed tired and truly asleep on the set of ‘Iya Afin’ when uncle Yemi Solade took the pictures. My point now is this; some bastard will now pirate the job and not stop there.”

“‘Once’ the poster is out, they will put it on the movies on YouTube so that people can watch thinking it’s the original movie of yours.

“Check my movies Olori Amolegbe and Omolakeji, people were already watching wrong movies because my poster(s) were on the movies; resulting to many people seeing it before your movie is finally out.”

“They do this to many movies. My prayers to God is to reward our hard work and crown us with success. Straight from the heart.”

The poster of the movie she is currently working on, Iya Afin is already uploaded on YouTube.

If you check the video, it is an old movie by Femi Adebayo.