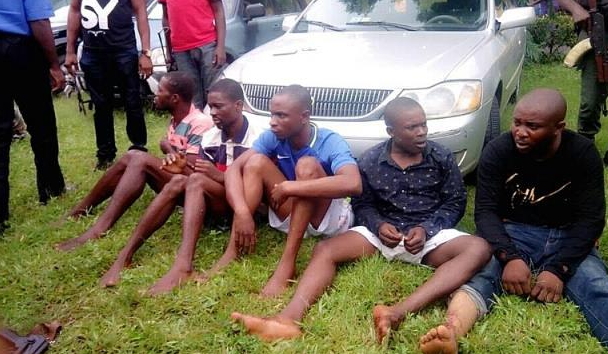 Police in Imo state today paraded a policeman, Corporal Jude Madu and five others for the abduction and murder of a Catholic Priest, Rev. Fr. Cyriacus Onunkwo.

The cleric was abducted on September 1 by gunmen who operated in a Toyota Avalon car and whisked him to an unknown destination.

The Catholic priest was found dead the next day.

The gang was also responsible for the killing of a police officer at a new generation bank in Owerri about three months ago.

Parading the gang members alongside other suspects, the state Commissioner of Police, Mr. Chris Ezike, said:

“I am delighted that the police command under my watch has made major breakthroughs in criminal investigation leading to the arrest of dare-devil suspected criminals, recovery of exhibits and dismantling of the various criminal gangs/cells.

“However, I am pained by the fact that some of the activities of these enemies of society have brought sadness, anxiety and general apprehension to Nigerians especially with the abduction and murder of Rev.Fr. Cyriacus Onunkwo of Umuotuasi village, Osina, in Ideato North local government area of Imo State on September 1 at Banana junction in Orlu, Imo State.”