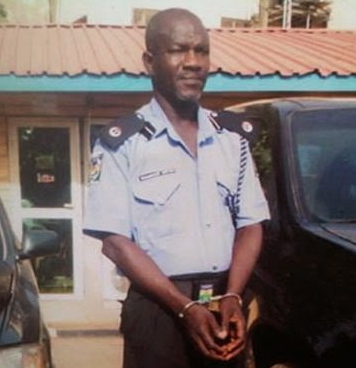 A police corporal has been arrested for allegedly killing his wife in Egbeda area of Lagos.

The suspect identified as Yinka Oloko reportedly shot his wife by accident on Tuesday the 24th of November 2015 in the bedroom of their rented apartment.

The corporal attached to the Special Anti Robbery Squad in Ikeja arrived home on the evening of the incident and started undressing with his wife sitting on the bed.

While removing his pistol from the holster, he mistakenly  shot his wife on the lap, leading to commotion in the apartment.

Oloko, assisted by neighbours, was said to have rushed the woman to a nearby hospital, but she reportedly died before they got to the hospital.

According to a police source, the matter was a case of an accidental discharge, adding that the suspect and his wife did not have any altercation before the incident.