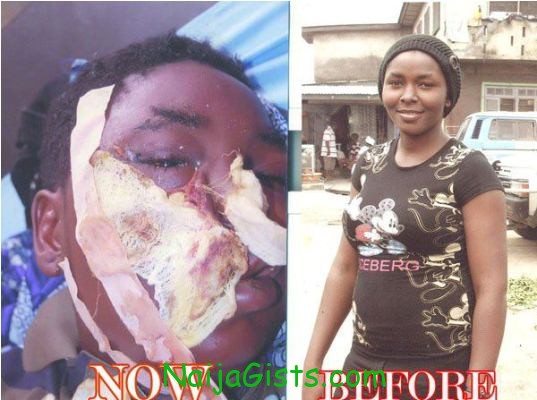 According to EP, the residents of Bariga, a high-density suburb of Lagos, recently woke up  to a shocking incident which at first looked like another case of police brutality but later turned out to be a bad case of love-gone-sour situation involving a Lagos policeman, Corporal Emmanuel Okujo, who shot his former girlfriend in the face with his service pistol. naijagists.com

The trigger-happy man took his ‘bad cop role’ further by kidnapping his victim’s younger sister and disappeared with her as a hostage.
The horrible incident happened on February 17, 2012, when the heartless lover boy attached to Ifako Police Division, Lagos, stormed the one-room apartment occupied by the two sisters, Blessing Isabor, 22, and Patience Isabor, 18, at No. 12 Ifateludo Street, Bariga, Lagos, at about 7:30 a.m., brandishing a pistol and seething with murderous rage.

Within 30 minutes, the dastard deed was done. What started as a threat from the officer of law culminated in a grim conclusion with him pumping bullets directly into Blessing’s face, thereby inflicting grave injuries on her once pretty face, after which he fled the crime scene with Patience to an unknown destination.

The circumstance surrounding the bizarre act is yet to be fully unraveled. An eye witness to the evil act, Grace Igbagbon, cousin to the Isabor sisters who also lives in the same compound with them, narrated the plot of the sad episode: “I was in my room when my son ran in and told me that he saw the police officer pointing a gun at Blessing. Fear gripped me immediately and I ran into the girls’ room.

I was shocked when I got there and beheld Okujo (the policeman) with his pistol drawn, threatening to shoot my cousins. He was pointing the gun at Blessing, but it was the two sisters who were both crying and begging him not to shoot them. I also joined them in begging him not to shoot them, no matter what they have done to him. Instead of listening to my pleas, he ordered me to leave or else he would shoot me as well. I ran out and raised an alarm. By the time I returned, he had shot Blessing and disappeared with Patience.”

On what she knew about the now at large policeman, Igbagbon, tearful and a bit hysterical, testified: “He used to come here to eat (pointing at a nearby canteen where she sells food), wearing his uniform most times.  I also know that he was very close to my sisters. Sometimes he would just come and go to their room directly”.

This poignant tale of “a cop’s blood-curdling cruelty” is complicated by an element of love triangle. A close friend of the hapless sisters provided an illuminating angle. The girl whose name is Oluchi avowed that the on-the-run policeman had over the past eight months been involved in an intimate affair with Blessing until recently when he suddenly switched his affection to her younger sister, Patience. Her words: “all I know is that the police officer dated Blessing for some months but suddenly switching over to Patience. We were all wondering how a responsible man could stoop so low as to have affairs with two blood sisters within a time frame of about eight months. He is just wicked because I know he was sleeping with the two of them”.

Another close friend of the two sisters, who preferred anonymity, also corroborated the story. She averred: “The Police officer after dating Blessing for some months abandoned her and started going out with her younger sister. He said he saw Blessing with another man. But must he because of that start ‘friending’ her younger sister? I am still wondering how Patience decided to start going out with a man that has already dated her elder sister. Maybe it’s because of the gifts he used to bring to her.”
According to information exclusive to Sunday Express, police officers from Ifako Police division had gone to Okujo’s Obalende resident as soon as the incident was reported. Their visit, however, only uncovered troubling evidence. “They discovered the policeman’s cloth and that of Patience, both bloodstained. We don’t know what he must have done to Patience; we don’t know where she is now,” a family member confirmed.

Since that ill-fated Friday two weeks ago, family and relatives of the hapless sisters have been thrown into emotional turmoil. Gravely-wounded Blessing is currently hanging between life and death at the Lagos State University Teaching Hospital (LASUTH), Ikeja. According to doctors, the embattled young lady has a fighting chance to live, but at the cost of series of surgeries. This again presents another problem for the family.

“We don’t even know where the money would come from because the family is poor”, Igbagbon said in tears.   It is double trauma for the beleaguered Isabor family, who apart from battling to save the life of one of their daughters, is also engaged in a harrowing effort of searching for the other abducted sister, not knowing if she would turn up dead or alive.

According to the grief-stricken woman, the two sisters, both secondary school leavers and natives of Edo state, lived in a one-room apartment with their mother who works as a nanny and rarely returns home due to the demanding nature of her work. “Their father is late, that is why they came down to Lagos two years ago immediately after their secondary school education to live with their mother and also secure a job. Now, the worst has happened; we don’t know where to start from.” She concluded her lamentations with a desperate plea to the public: “We need help from the public to treat the battered young girl and bring her back to life, Blessing must not die.”

Meanwhile, the case has been reported to the Lagos State Police Command and investigation is on-going to ascertain the whereabouts of the officer and the 18-year-old girl he took hostage. When contacted via phone, the Police Public Relations Officer (PPRO), SP. Jaiyeoba Joseph, offered an insight: “The police is aware of the incident and has swung into action. The younger sister is the one he was going out with and both of them are currently at large.”
(article by By JAMES EMMANUEL)