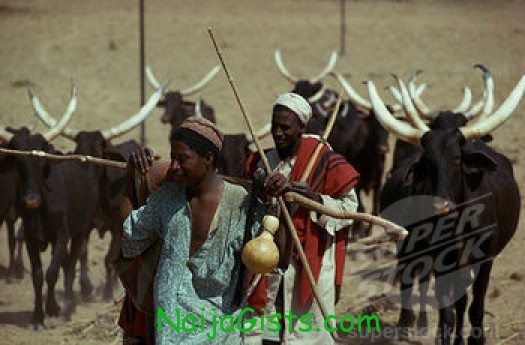 Fulani herdsmen yesterday abandoned their cattle and seized the Ogun State stretch of the Lagos – Ibadan Expressway. They used bows, arrows, knives and other weapons  to rob travellers of cash and other items. naijagists.com

They also stalled traffic for many hours at different times of the day.

The herdsmen, it was gathered  unleashed some animals on the road, which slowed down traffic and enabled them to rob their victims.

It was gathered that travelers who were heading for Lagos were compelled to detour. Those traveling in the opposite direction had to beat a retreat.

For many hours, they seized the Expressway and three times the herdsmen were dislodged from the road by Police patrol team from the Ogun State Command, Police spokesman Olumuyiwa Adejobi, said.

Adejobi said the police would now beam their searchlight on cattle rearers, having taken to crimes along with minding animals.

He said no arrest has been made while the police have successfully evicted them from the  highway.