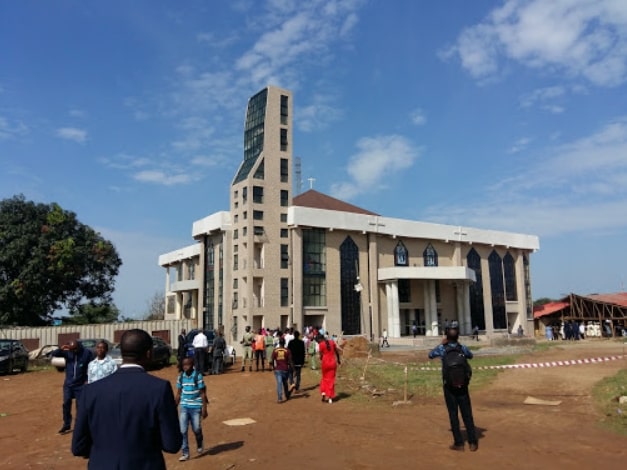 According to eyewitnesses, the man who wore sunglasses and a hat that had the inscription ‘POLICE” on it, did not have a tenable explanation when he was apprehended by those in the church.

He was also wearing a faded suspected US Army Fashion type camouflage trouser.

He drove a silver coloured Peugeot 406 with an Abuja number BWR-417HF.

The incident, it was gathered, happened shortly after Mass.

Narrating what happened, a lady who made a video of the incident on her cellphone said;

“This is just happening here right now, a terrorist entered my church Archangel Raphael Catholic Church, Garki Abuja, Police Barracks. He dressed up with turban with a police face cap and dark shades. He drove to where the men were having meeting. We were shouting for him to stop. So we now shouted that people should come out and stop him and they now stopped him.

videoing his car. We saw some things in his car, drugs and everything. So we are just being careful now. And it’s Catholic Church is their target now. So I beg all Catholics should tighten their security. Let us now take anything for granted. Now he is police station in Garki.”

But reacting to the incident, the FCT Police Public Relations Officer, DSP Josephine Adeh said there was no cause for alarm.

Here is what DSP Adeh said about the incident:

“A middle-aged man was accosted by some of the worshipers after the mass, while the men’s fellowship was holding a meeting. The main object of suspicion was his dressing and the manner in which he drove in. Preliminary investigation however shows he had just returned to the country and had come into the barracks to seek an old friend whose address he cannot clearly remember.

“The church was not attacked, no arm or prohibited item was recovered in his possession except for a face cap customized “Police “ which is neither an approved kit nor an accouterment in the Police dress order. He was also wearing a faded suspected US Army Fashion type camouflage trouser.

“Though fear and panic erupted due to recent happenings in some parts of the country, normalcy was immediately restored to the situation as the police were on ground to swing into action.

“While the investigation continues, members of the public are urged to go about their lawful duties without fear or apprehension. once again, we advised the good people of the Territory to eschew the habit of promulgating news blown out of proportion or out rightly fake in narration. We shall continue to ensure that the FCT remains safe and peaceful for all and sundry.”