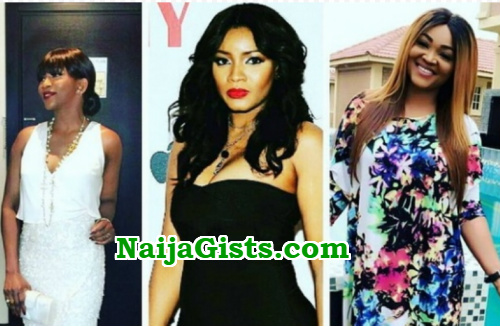 July 19, 2017 – How Popular Nollywood Stars Shunned AMAA 2017 Awards Because They Were Not Nominated

The 13th edition of African Movie Academy Award went down as one of the most star packed events of the year. As usual, it was an event that made so many people look forward to seeing top female Nigerian celebrities on the red carpet..

But to our utmost dismay, actors like Omotola Jalade, Mercy Aigbe, Toyin Abraham, Mercy Johnson, Genevieve Nnaji, Rita Dominic were not at the event which got a lot of people wondering.

The Africa Movie Academy Awards has been one of the most anticipated awards in Africa and as the years go by, the award becomes more competitive .

Nollywood divas were not at the event and it left us with the question of why they were absent. Was it because they were not nominated for the awards or they had more important businesses to attend to?

For the Fashionista, Mercy Aigbe, report had it that she is presently not in the country, but if she was nominated in any of the categories, would she not have been there?

Speaking about the other actresses who may be probably around, what do you think could have made them shun the event. If they were not nominated like some have stated as their reason for not attending, how about their colleagues and friends that were nominated, couldn’t they have been there to cheer and celebrate with them?

Truth be told, it seems Nigeria is concentrating more on producing good movies and neglecting individual performance as they allow other country to cart away these awards. This explains why for the very first time in history, no Nigerian actor won an individual category at the 2017 African Movie Academy Awards (AMAA) .

Senegalese movie, ”Felicite”, became the biggest winner of the night as the movie scooped a total of six awards which include awards for best film, best actress in a leading role and best actor in a supporting role.