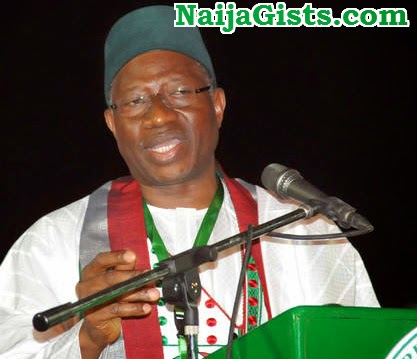 Danjuma said: “It is disheartening to know that the incoming government of Buhari will have to contend with a debt of over $60billion and there is nothing to show for this huge debt. Well, we would know what happened to these monies, because I believe that the Buhari administration has to, and should, in national interest, investigate the administration so that we would know what happened.”

ECONOMY:
When Jonathan took over the leadership of government in 2011, Nigeria economy was robust and foreign debt minimal but 4 years down the line there is little or nothing to show to justify such indebtedness, as the country is now indebted to the tune of $60 billion.

The economic fraud in the name of fuel subsidy (SUREP) remains a theatre of corruption spearheaded by the Coordinating Minister for the Economy and Minister of Finance, Madam Ngozi Okonjo Iweala, and few days to Transition the country is in total shambles with unending queue of fuel scarcity, no gas to power electricity as the entire country is plunged into darkness.
A situation where groups of individuals holding the entire country hostage as a result of fuel subsidy- claims by the Oil Marketers requires massive attention for the in-coming government, since removing subsidy and building light refineries may help us in the long run. We say no to economic hostage, executive blackmail, self-allocation of arrogance and constant display of economic muscle by few individuals over more than 170 million Nigerians who live below poverty line.
At this point, the incoming government must probe the activities of Oil Marketers with regard to their role to scuttle the Transition.

DIRTY SECRET:
Since he lost out of General Election president Jonathan has abandoned Nigeria to its faith the only seemly constitutional power currently on display is sacking, appointing, re- appointing and last minute privatization of key Federal Government sectors, so sad that the entire country is plunged into darkness as a result of power failure on account of non-supply of gas, to make it worse the country is gradually grounding to a halt, as there is no petroleum product in virtually all the filling stations leaving unimaginable long queue.

This is what I call a coup d’état or conspiracy of some of sort to render the government of President Muhammadu Buhari useless and as well incite the general public against the incoming government, this must not be tolerated as Nigerians expects these groups of cabal to be held responsible, immediately he assume power, this is uncalled for in a hard- earn democracy where the entire world shall beam their search light on Inauguration of May 29th, what an act of executive recklessness an sheer impunity in a country where President holds way?

IMPUNITY:
Under GEJ Nigeria became a Banana Republic and snowball into land of political and economics possibilities where the dishonorable men became honorable, with a Title of his Excellence, with touts playing a very prominent role in economic life of a country on account of being a close associate of Government through dubious contract, may I need to remind us that Governor Fayose, Asari Dokubo and the likes fall into this category

Under GEJ, his chronics eat their cake and still have it back, as impunity persist the land with GEJMATICS principle taking command in whatever thing government does, 16 is greater than 19 in Governors Forum ,7 greater than 19 in Ekiti impeachment saga, the atrocity of chicken impeachment in Enugu State, an attempt removal of Tanko Almakura of Nassarawa state, and orchestrated theory of ” financial recklessness” by Reuben Abati that saw the untimely removal of Sanusi Lamido Sanusi, the now Revered Emir of Kano State due to his sincerity to Nigeria probity of missing $20million.
In a country of intellectual heritage it is so sad that people like Femi Kayode, Doyin Okupe and likes were the best possible candidates to sell the policy of government, of course what do you expect to get? disgrace upon disgrace. The fifth columnist, hate campaign speeches, mudslinging deplored during electioneering were targeted to divide Nigeria along ethnics, religions and sectional lines rather than what unite us as a Nation, and to make the matter worst the First Lady’s display of executive Arsenal in a country where there is no constitution backing for such, questions President Jonathan’s over- zealousness and outright over-lordship, yet Orubebe’s act of treason is seen as normal.

INSURGENCY:
I never for once doubt the strength and efficiency of our security apparatus especially the Nigeria army both serving internally or externally. Nigeria Army remains the best when it comes to International Peace Mission, over the years they have proved their mettle, but one cannot figure out except for political reason what went wrong in their rule of engagement, at the beginning of war against the insurgency Boko Haram. However the electioneering period leading to General Election exposed this government, in what was regarded as miracle of some sort, within six weeks the success story recorded by the security apparatus rendered the rag- tag Army of an insurgency useless, making those affected by the Boko Haram onslaught to think that government had deliberately abandoned them for reasons not clearly defined.

At this junction I urge the President- Elect President Muhammadu Buhari as a matter of urgent Natiional security importance, arrest the Formal Chief Justice of Nigeria, CJN, Muhammed Uwais and Secretary to the Federal Government of Federation, SGF, Ambassador Babagana Kingibe and Formal Nigeria Ambassador to United Nations, Ibrahim Gambari for their supportive role to Boko Haram, which claims the lives of many Nigerians, they are the likely financier of Boko Haram as they are now demanding for amnesty, it is a shame that these groups of Northern so-called Elders in conjunction with external forces probably from Sudan, chad, Niger and other countries inflicted havoc on Nigeria citizens through their leader Shakau, are now asking for amnesty. These individuals are the enemies of State and should be dealt with no matter whose ox is gored. What a gut? they could not even wait for President-Elect President Muhammadu Buhari to take over power before coming out with their frivolous demand and possibly inciting the Southern part of the country against the incoming government. How on earth will a normal human being think of granting amnesty for lunatic organization such as Boko Haram which is no respectal of religion, sex, region, tribe, age except destruction, the only language they understood, it is imperative, these so-called Northern Elders stopped insulting the sensitivity of Nigerians, as no tactics deploy by anybody can stop President Muhammadu Buhari from dealing with then if found culpable.

CORRUPTION:
For a PHD Holder to assume corruption is mere stealing or stealing is not corruption, amount to total justification and license for free- for- all looting, that is steal as you can and go unpunished, as evident with the current debt.
From this very moment Nigeria was caught in between the devil and deep blue sea. I must stressed that so much money was made from crude oil in the last four years but corrupt tendency deplored by Jonathan government continue to milk the country dry until it reached it crescendo of red alert, as there is no tangible development to justify such humongous amount due to corruption per- second billing system.

It remains the greatest mystery that six years of Jonathan Administration no body was convicted of corrupt cases despite all the wonderful lawyers and Judges we have in the country, the only near conviction Nigerians would have been happy with was that of Police Pension Scam involving Abdulrasheed Maina who allegedly looted N469 billions of Police pension fund, was at the end asked by Presiding Judge Justice Adamu Bello to pay N750, 000, and that he did through his back pocket and was left off the hook. Leaving Nigerians to pounder with amazement on how judgement could be procured or bought through the back door.

REALITIES:
In a few days from now the entire truth shall be unveil to be inaugurated by the President- Elect President Muhammadu Buhari (PMB). Do not ask me how he wants to do it? As a formal military General and nemesis of corruption be rest assured that the corrupt officials will not go unpunished, thank God the enemies of State had dreamt about it long time ago, that a day will come when President Muhammadu Buhari shall built prisons across the country to accommodate them, because of these they wished him dead, he was regarded as old aboki with brain dead, a man without certificate, too old and unfit to govern Nigeria, and now that Almighty Allah has disgraced them and he is still alive and our President to-be in the next 4years, they should be ready to account for their stewardship, nobody would be persecuted, in the thinking of President Jonathan rather in the word of TY Danjuma, Jonathan corrupt government must be probed for the sake National interest, and those found wanting shall face the full wrath of the law.