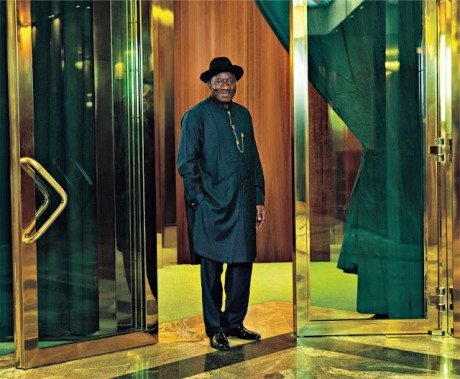 The President of the Federal Republic of Nigeria, President Goodluck Jonathan, has been featured in the May/June 2012 edition of Vogue Italia magazine.

The feature details the interview which the magazine’s editor Franca Souzani had with the President, the Vice-President Namadi Sambo, as well as the Ministers of Petroleum and Culture and Tourism.

During their chat, Jonathan revealed plans to revive the textile industry, set up an African luxury shopping area similar to California’s Rodeo drive in Lagos or Abuja, along with fashion weeks of repute, such as Mercedes Fashion week in the U.K.

Less than a month ago, U.S based TIME magazine named Jonathan as one of the most influential people in the world.

Here’s the feature as contained in the magazine…

It’s Thursday, January 5 when we land in Abuja, Nigeria’s capital. The ultimatum expires today of Muslims to Christians. We have police and army escort us to have total security. We are going to the Palace of the President and does not have much time. At 6 pm, at best, we should take off. No real dangers, reassure us, but better to avoid risks. The streets everything is calm and there is no confusion, and Abuja is beautiful with lots of greenery and imposing houses hidden behind high walls.

It is a city rich-looking and with a totally clean everywhere. We’re late for our appointment because of the flight before ours, we must also pass an endless series of checks: first stop for cars, second for us to photograph and inspect the documents, then searched us and deposit all cameras and mobile phones. The situation is not simple at this time in Nigeria and all do their work carefully.

The real disappointment is not being able to get the camera equipment. They understand that it is a problem for us and offer us a book with many photos of the president. We can choose the ones you want, tell us. ‘No‘, explain politely, ‘the pictures we do, we have a style of Vogue and we want to keep‘. I stay with the book in hand and with all eyes on me, yet I could almost ask themselves what to say or do. ‘Calm down, let me speak with the president and then we’ll see.’ Among the disappointment of a photographer and cameraman, and the uncertainty about the arrival of the president I feel bad for everyone.

A guard and the chief of protocol we are going to welcome in the Oval Office where he should be held soon after our meeting. I turn and look at all my group a bit ‘down. ‘Smile please, and not a request’. Welcomed, therefore, our smiles and himself with a good-natured expression under a wide-brimmed hat, elegant in a blue tunic and trousers, and a gold chain that slips into the pocket, enters Goodluck Jonathan, President of Nigeria, elected April 16, 2011.

It is followed by the vice president, Mohammed Namadi Sambo (with him in the photo on this page) – who is a Muslim while he was an evangelist. Enter also the oil minister Diezani Alison-Madueke, a beautiful and elegant woman in traditional dress, princess, with a master’s degree at Cambridge, who now commands – first time for a woman – the most important Ministry of Nigeria, the eighth exporter of crude oil per world.

Impressive in its size and authoritarian with a broad-brimmed hat like the President, also comes Edem Duke, the Minister of Culture and Tourism. We sit. I am close to calling Goodluck Alison-Madueke to take the parol a. The Minister explains in detail our design firm and Fashion 4 Development and our intention to dedicate a whole number to Africa ‘photographing’ from a positive point of view, just to give the idea of a country that is not only death and hunger, but it has great potential for growth and job openings towards new initiatives and development.

Advocates both projects and looks at me with kind eyes that do not allow replies. ‘Stories and convincing’, seems to say. And so I begin. ‘President, thank you for accepting our request to interview her. It is true that we are a newspaper image, but I think there is much to do in this regard in your country , which currently does not appear as rich and secure while having oil and great prospects. ‘ I stop, interrupted by his gaze and his voice informs me that the motto of the country right now is ‘Rebranding Nigeria’. ‘Really I could not agree more. But I want to revive your textile industries that were once strong and that since there is oil have been neglected, if not forget it. And why sell the patent for the tie dye-Chinese who move so theproduction in their country? In this way, within a few generations, there will be your knowledge of this tradition. If only we would produce in Nigeria would work for your local and not disappear culture. You have a potential crazy, just look what happened in Brazil and many European and American companies produce in China. Why this is not possible to do it again in Nigeria? ‘.

She smiles and missing his head. I continue: ‘All Nigerians rich spend their money abroad because here there are no shops, no hotels from African flavor and chic restaurants, meeting. Why not build a Rodeo Drive’ Africa ‘in Lagos or Abuja with stores and shops with both foreign and Nigerian products? ‘. I stop, maybe I’m exaggerating. He looks at me and says: ‘You know our designers: they are good and have great creativity.’ ‘Sure’, I continue. ‘Have you for example Duro Olowu who is famous as Louboutin America and Europe, as well as many other designers. Mercedes sponsor many fashion weeks and he could talk mto do something here too. In short, ideas are not lacking, need do, and quickly. Nigeria is, in north-central Africa, the country with more opportunity. Why not use them? ‘.

Now I am silent. The President looks at the ministers, he looks happy and seems to share what I said. Speaks up and agrees to help us to ensure that this does not remain just a good speech. ‘I agree, I agree and this will be for us the basis on which to start thinking.We have a variety of problems and some very serious, but this will not prevent this country to progress and change its image. And also because he spoken out in no uncertain terms. Is there anything I can do while you’re here though for a few hours? ‘.

I laugh and raised directly, without wasting a second, I reply: ‘Yes, a photo taken by us in Vogue style. Just a nod and they’ll get all the equipment.’ He looks around with his gentle smile and shy. ‘How to say no?’ She says. While I go out, the Minister of Tourism says: ‘It’s always true That dynamite comes in a small package’ (Franca Souzani)