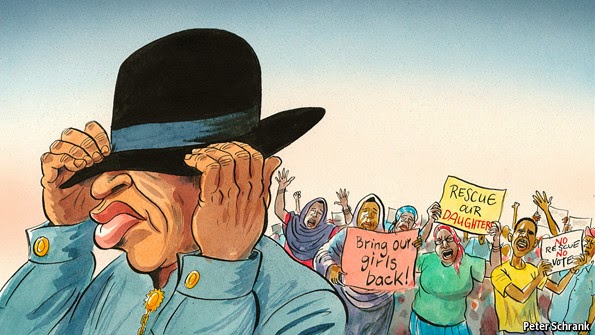 Wonder shall never end in Nigerian politics. How can a failure like president Badluck Ebele Jonathan think that he can win reelection in Nigeria ever again? The answer is that he will do any evil possible to force himself on Nigerians by massive election fraud, bribery, political intimidation by deploying his criminal security agencies, political assassination, and humiliations of the electorate. This president should not even think of third term reelection if he has any element of shame, integrity, conviction and godliness in him for these following reasons :

First, on his watch as the most incompetent, low mentality, and highly irresponsible president ever in Nigerian history, more than 150,000 innocent Nigerian citizens have been murdered by Boko Haram terrorists. Millions of Nigerians have been displaced by the terrorists Boko Haram. These criminal are committing gruesome crimes against us because of the weakness, corrupt practices, lack of economic agenda, and a shattered national security agencies. This do-nothing president has lost control of Nigeria for the first time, and he is clueless on how to deal with the threat posed by these animals in human bodies called Boko Haram. President Jonathan lacks all the attributes of a “Commander in Chief” of any nation. Therefore, he is the worst mistake in Nigerian politics, and our people cannot wait for this monster to be voted out of office or be overthrow by the military if he stays beyond 2015.

Moreover, this president has completely destroyed Nigerian economy and had intentionally imposed great hardship on Nigerians. How? Just few weeks after he was reelected in 2011; he wickedly increased the prices of petrol and kerosene by 75%. As a result, prices of food products have sky rocketed; ridiculous costs of transportation; joblessness is the order of the day, the highest unemployment rate ever among our able youths, unimaginable level of corruption, and lack of foreign investments because of insecurity. This man spent millions of naira on the wedding of his abducted girl but neglect the welfare of millions of suffering Nigerian youths. What a shame!

In addition to that, Jonathan’s administration is the most corrupt and most imcompentence in Nigerian history. Why? Recently, former American secretary of state – Mrs Hillary Clinton confirmed that this president had embezzled so much of our oil money and he is directly or indirectly aiding corruption in Nigeria. Wao! A every high level U.S official like Hillary and a great woman who may soon become American president can never make such statement without any fact or evidence to back it up. We must not forget that, president Badluck Jonathan said during the presidential media chat early this year that, looting of public funds should not be called corruption but common stealing. This is on Utube if anyone is in doubt.

Another reason why this do-nothing president should never run again is that,he cannot guarantee adequate security for Nigerian citizens and visitors alike. Therefore, any president who can not protect lives and properties of his/her citizens doesn’t fit for the highest position in the nation. Where are the Chibok girls kidnapped over a year ago? These girls have been going through so many unimaginable torment ever in the hands of their captives. Few months after their kidnapped, the president spent the people’s money on the wedding of his abducted girl. President Badluck Ebele Jonathan should remember that there is God O.

It is important to note that president Badluck Jonathan cannot win any election again in Nigeria through a free and fair election. His only option will be massive election fraud and voters intimidation. But all that will surely backfire after the 2015 general election. If I was to advise this unpopular president, I will ask him to leave Aso Rock peacefully, enjoy his looted money with his illiterate wife, and pave way for a competent president in 2015. We need a president that will feel the people’s pains and not a president dancing and campaigning after terrorist attack that took the lives of 150 innocent people in Abuja few months ago. President Badluck must let go of power for peace and prosperity for our nation and all Nigerians. This is the only way forward for Nigeria after the 2015 general election. Nigerians should shun tribalism, culture differences, religious intolerance in the coming 2015 general election. Let us elect a competent president regardless of his tribe,religious culture and language. We all have a duty to elect people of great characters and not criminal at all levels of government, and this is the only way for ordinary Nigerians to partake and enjoy the dividend of democracy.