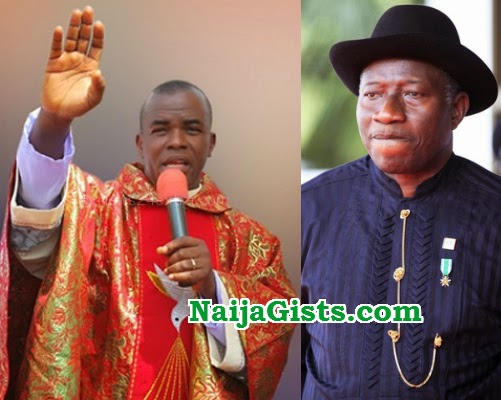 The founder of Adoration Ministry in Enugu, Catholic priest Ejike Mbaka yesterday cried out to security agencies to protect him following alleged threats to his life.

The priest said President Goodluck Jonathan should be held responsible if anything should happen to him.

Mbaka had, in a recent sermon in his church, accused the President, and his wife, Patience, of being behind an alleged plot to assassinate him.

He said Jonathan decided to kill him after he preached against the President’s re-election in a New Year Eve message at the Adoration Ground. The sermon was titled “From Good Luck to Bad Luck.”

Media Officer of the Adoration ministry, Ike Maximus Ugwuoke, in a statement made available to our correspondent on Thursday said Jonathan wanted Mbaka dead.

In the statement, which was titled “Jonathan Wants Me Dead Before The 2015 Elections’, Mbaka said the police had refused to act on the allegation he made.

The statement expressed concern at the insistence of the Enugu State Police Command that there was no report of any threat to Mbaka’s life.

Parts of the statement read, “It is with a deep sense of concern that we are constrained to make this statement on the continued threat to the life of Rev. Fr. Ejike Mbaka over his 2015 New Year message titled “From Good Luck to Bad Luck”.

MIA Notice: Please I will be away for a couple of hours…please bear with me…travel things