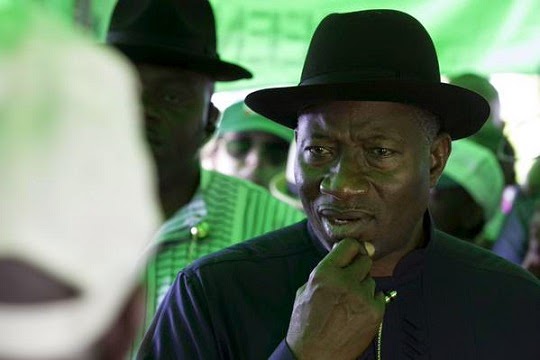 May 25, 2015 – President Jonathan: The Man Who Met A Treasury & Stole Nigeria Blind By Tunde Moshood

I’ve been pondering over the reason why an outgoing President who met a buoyant treasury will be this cruel to the extent of allowing the whole nation to shut down.

Yes, the sovereign nation called Nigeria has been run aground, we have never witnessed tough time this hard in history even during the inglorious June 12 days when the whole country almost burst into flames, at least there was still electricity.

Do we need a soothsayer to tell us that Jonathan has an eleventh hour sinister motive? How can he be busy settling scores sacking perceived enemies to appease his loyalists when there’s no fuel, no light, no water, no salary, no security of life and property, airlines are shutting down, our Oil Wells have broken down, Communication firms are switching off distribution channels, workers are suffering while the masses are famished-everything is in standstill.

By now, maybe his permutations will be that, the whole country will be shut down completely leaving the visiting foreign dignitaries with no choice but to jettison the idea of honouring the forthcoming inauguration or better still, maybe he’s paving the way for the fifth columnist, anything can happen considering the fact that, he’s been exercising the traits of a typical bad looser. Indeed, he wants to become a peace ambassador after office.

It is just 4 days to the inauguration of the next administration to be led by Gen. Mohammodu Buhari and the body language of the incumbent is saying nothing but efforts to sabotage the preparations, succinct to say Goodluck Jonathan is not interested in the progress of this nation or why would he keep mum on the deteriorating situation on ground.

Just imagining the thoughts on his mind, now that absolutely everything is being shut down with the fuel selling at N500/litre “GEJ been making sure Buhari starts on a clean slate; no electricity, no fuel, no security, no foreign reserve; here comes the messiah”, that’s from his handlers.

We can’t have it worst than this, let him have his ways, get all the titles and inherit this epitaph after leaving the office on Friday, May 29th, 2015: GEJ-The man who met a bouyant treasury and stole Nigeria blind.

Continue Reading
You may also like...
Related Topics:2015, corruption, jonathan