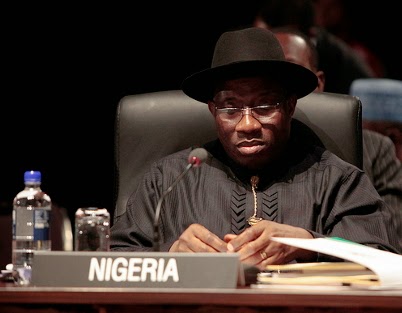 May 9, 2014 – President Jonathan, Worst President Ever In Nigeria’s History

Goodluck Ebele Jonathan has no doubt failed Nigeria, never in the history of Nigeria have lives been so helplessly lost in hundreds on daily basis as it is happening in the era of Ebele Jonathan. The Nigerian constitutions empowers and also confers on Jonathan as the Commander in Chief of the Nigerian Army. He also swore to protect and defend the constitution of Nigeria, to which the citizenry have surrendered their sovereignty at the elections; to him to protect us by the oath he took on assumption of office. Nigeria is not at war but looses human beings to the Boko Haram insurgency on a daily basis even more than in Syria and Afghanistan that are in full scale war.

Jonathan’s weakling story opens a new chapter in the history of Nigeria, and that Nigeria needs to device a methodology of critically assessing who becomes the President in future, either than this nonsensical rotational approach which has turned out to be very expensive experiment. Who could have thought Nigeria in our lifetime will have a President who will bring on board political platform an illiterate first lady who at the least of her public engagement ridicules a whole nation with very uncultured vituperation. It certainly tells the life story of our President and where he is coming from, the story most Nigerians did not know because he was never really assessed thoroughly before he became President.

Jonathan and his wife Patience had lived in self denial for more than two weeks after the abductions of these innocent girls’ news broke, they sort to blame political opponent for deliberately creating an atmosphere of fear and panic to achieve a political gain, even when the parents of these girls hit Abuja roads; Jonathan and his wife were still passing the buck as though any other Nigerian has the authority either than Jonathan to order the military for a rescue mission. A society they say deserves the leader they get but the Nigerian society is never known worldwide to be this docile like this man Ebele Jonathan. It is very disappointing to see our President talk so incoherently and sometimes repeating himself while his thought processes becomes much more like someone beginning to learn how to communicate in basic English. Listen to Patience Jonathan speaks and you’ll not be surprised it takes two of a kind to tango. Ebele Jonathan is no doubt an educated version of his wife Patience.