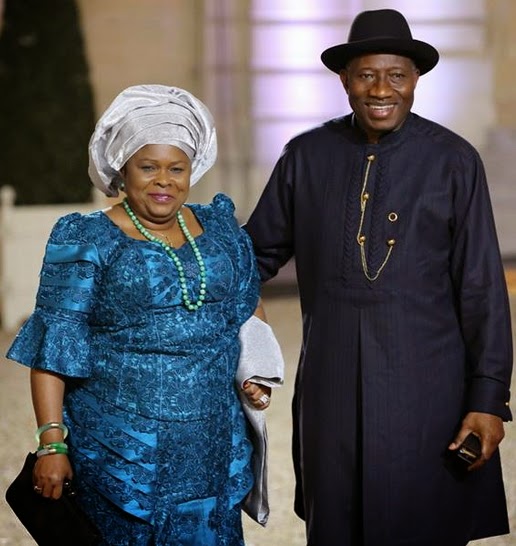 When I first heard that Dame Patience Jonathan had summoned a meeting to get to the root of the inconsistency in the number of abducted girls, I commended her. Wasn’t in her place to set up a committee but I was happy nonetheless. I actually recall a proverb I used in response to someone’s comment to the contrary; “when you’re in a pit and everyone else around doesn’t want to help, you become grateful for even a leprous hand stretched out to help”.

It was not the ideal thing, but then, lives of over 200 innocent girls were at stake. So, if Mrs. Jonathan decides to help, let us accept so long as these girls are found.

Came Monday and the “Diaris God oooo” video from Sunday meeting which has since gone viral. I’ve watched it more than 7 times and each time my embarrassment grew bigger than the last. She lost her cool, if she ever had any. She was talking to people as though she had any form of authority over them. Hell no!

First ladies are support a huge support system for their husbands. As far as governance is concerned, they are domestic appendages (apologies to Professor Wole Soyinka), which wield enormous powers in the bedroom, garner support for their husbands during election campaigns and adopt a pet project through which they impact lives that’s what most are. All over the world, First Ladies exhibit so much grace, finesse, decorum and panache travelling the world with their husbands, looking pretty, smiling or frowning into cameras (as occasion demands), receiving and entertaining presidential guests, making the right appearances at the right time, saying the right things at the right time, and acting the right way at the right time. And many are actually tutored on their roles and responsibilities. That is the way it is. Safe for a few and in recent times Hillary Clinton who featured strongly in her husband’s presidency enough to get them derisively labelled as ‘co-presidents’ comes to mind. Despite the fact that Mrs. Clinton is a very smart woman who brought many firsts to the office of the First Lady, some Americans criticised her role in governance with some comparing her with Lady Macbeth. Her supporters, however, make a case for her by reminding other Americans that Bill Clinton had promised a presidency of ‘two for the price of one’ meaning that Hillary was the other president they got for free.

When Mrs. Jonathan started meddling in state affairs in the crudest of ways, people who spoke up were labelled all sorts. Now, after enabling her to take her buffoonery several notches high and become a spectacle to the world they are asking people not to laugh? I wish I could actually laugh at that video, but I have been too embarrassed to do so. That we are even laughing in all of this shows what a sorry people we are. I mean, but for the kind of country this is, are we supposed to JUST laugh? We should be enraged and outraged! A first lady calls a meeting of police officers and we find it cool but laugh at the manner she (dis)comported herself and even that becomes the issue? Had she limited her intervention to women gist between herself and Mrs. Shettima and other non-elected women, perhaps, we wouldn’t be here.

To the crux of the matter, I mean the reason for the outburst. Mrs. Jonathan became frustrated not because girls were abducted, but because she was convinced some people just wanted to make her husband look bad and incompetent. She was miffed because according to her, some wanted to kill her husband and make her a widow. Her convictions were conveyed in her statement of warning to protesters, do not protest. If you do, you might get hurt. Seriously? You see, as far I am concerned, it was never about the girls for Mrs. Jonathan and this is contrary to my earlier position on this.

One question I have been asking and to which I am yet to get an answer is: given the state of emergency in Borno, who is the Chief Security Officer of that state? Forgive me if I am guilty of naivety but I would have thought matters of security rest solely on the military of which Dr. Goodluck Ebele Jonathan is the Commander-in-Chief? Perhaps, like the rest of us, even she should get all her facts straight and she’s at an advantage given her proximity to the president. More questions tearing us apart, only the answers can set us free.

About the author: Petra Akinti Onyegbule is a good governance advocate. She writes in from Lagos.