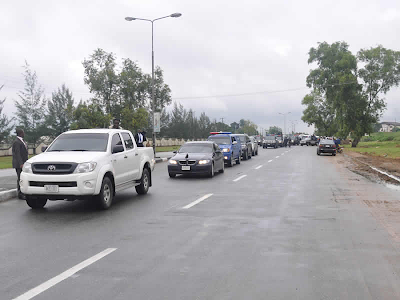 The two vehicles had a head-on collision with serious impact, causing varying degrees of injury to the occupants of the vehicles.

NAN reports that the accident occurred few minutes before the presidential motorcade came to the scene.

The security team in the convoy swung into action by rescuing trapped victims in the two cars.

The front door of the passenger seat of the Nissan car was axed before a middle aged woman, who was trapped inside, could be rescued.

NAN reports that a team of Federal Road Safety Commission (FRSC), led by one Mohammed Haruna, came to the scene of the accident about 30 minutes into the rescue operation.

The victims were taken to the Federal Medical Centre, Lokoja in an FRSC rescue van for further medical attention.

An eye witness, Aliyu Sadiq, said that the accident was caused by over-speeding, dangerous driving and the poor state of the road.

Sadiq appealed to the Federal Government to expedite action on completing the dualisation of the Lokoja-Abuja highway.

The eye witness, who is a commercial bus driver, said he plied the road on daily basis, adding that “there is a hardly a day that an accident is not recorded on the road.” (NAN)