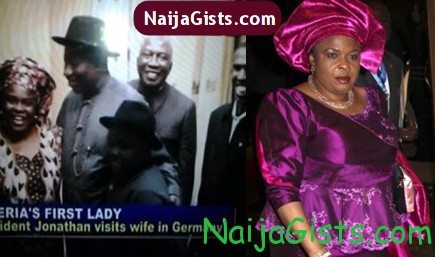 Nigeria’s leading opposition party, the Action Congress of Nigeria (ACN) Monday condemned the presidency’s decision to show a video clip of President Goodluck Jonathan’s visit to his wife in Germany, describing it as shameful and shocking. naijagists.com

It accused the President, who it said was fully aware of what transpired during the illness of his predecessor, yet has not learnt from that episode.

In a statement issued in Lagos on Tuesday by its National Publicity Secretary, Alhaji Lai Mohammed, the party said the information managers of the president failed in their duty by allowing unnecessary controversy on the whereabouts and health status of the First Lady.

”Let’s be clear, there is nothing to be ashamed of in someone is sick since we are all human and anyone can fall ill at any time. In particular, people occupying the public space, including the First Lady, who is ill, deserves nothing but our prayers and sympathy.

”However, where information about such persons are with-held or deliberately distorted, people tend to shift their focus to unraveling the truth about the situation, which is the case with our First Lady,” it said.

ACN described as a shocking irony the fact that President Jonathan, who is aware that the poor management of information over the illness of his predecessor, Pres. Umaru Musa Yar’Adua, contributed to the erosion of public sympathy for the late President and instead swung it in favour of his then Vice President (Jonathan), would make the same mistake by hoarding information on the sickness of his wife.

”It is a shame that people just do not learn from the past. Irrespective of the cheeky and unprofessional comments by the presidential spokesman, that the video has put paid to all the lies that people who play politics with almost everything have been spreading, the indisputable fact, going by available information, is that the First Lady indeed took ill and was flown to Germany for treatment.

”Had the information managers at the presidency lived up to their billing, there would have been a full disclosure immediately the First Lady fell ill, and instead of the unnecessary controversy over her whereabouts, the good people of Nigeria would have offered prayers in torrents for the First Lady and her family.

”Now making it look like the First Lady went to Germany on holiday ‘to rest’ or she is on a pilgrimage of sorts when indeed she is recuperating from an illness is another testimony to the increasingly legendary incompetence and cluelessness that permeate this presidency, and we expect all those involved in this amateurish attempt at cover-up to be ashamed of themselves, instead of engaging in empty bravado and pointing fingers at imaginary enemies,” the party said.