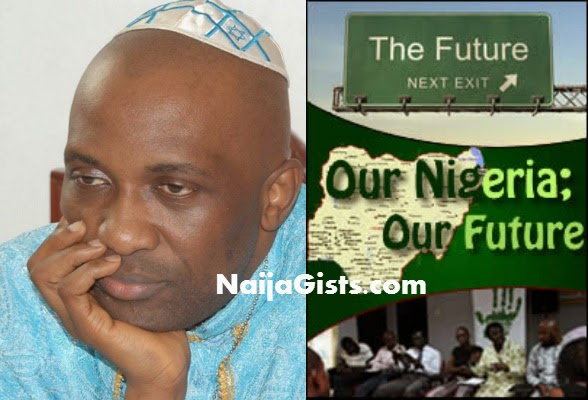 Controversial prophet and the founder of INRI Evangel­ical Spiritual Church in Lagos, Elijah Ayodele has released his latest predictions about Nigeria for the incoming year.

Let me start from the railways; the Nigerian government wanted to put the railways right, but what I foresee is a derailment, an accident. The govern­ment wants to improve the railways system, but the efforts will not work as expected. There will be improvement, but later it will be inefficient.

First Bank, Zenith Bank, Fidelity and Skye bank will lay off some of their staff. These banks must be care­ful not to be attacked in Lagos, South West, South South. Diamond Bank must be prayerful so that one of their branches will not be engulfed by fire.

There will be leadership changes in First Bank, Skye Bank and Fidelity Bank. Some banks, Zenith Bank, Stan­bic-IBTC, Heritage bank must be careful so that they will not face crisis.

The Islamic bank will go into commercial banking. The staff of the Central Bank of Nigeria must pray that none of their branches is burnt by fire.

Fuel Subsidy Removal Will Cause Big Problem For Nigeria In 2016

Government will have more problems by re­moving oil subsidy. If care is not taken, we are going to buy petrol at N200 per litre. The removal of oil subsidy will spur militant youths to vandal­ise pipelines to steal products for sale. Stoppage of the amnesty programme will cause a breakdown of peace in the oil industry. There is going to be more cleansing in NNPC.

Nigerians should set the first two weeks of 2016 January 1-14, for prayers to seek the face of God.

If the All Progressives Congress is not careful, the party will crack. Also if PDP does not go back to beg the founding fathers, the party may not re­cover, because some PDP governors will decamp to APC. But a northern party will emerge. CPC is not yet over. A group from the North will recreate CPC where a northern person will be incharge. APC as it is now will have problems if they are not careful. APC and PDP need a lot of prayers.

In Ondo State, if PDP does not pick the right candidate, they will lose the election. If they work with somebody called Saka, it will help the party. If APC wants to win the election, they should look towards Boroffice. Now Boroffice and Akeredolu may give them victory. For PDP, Saka and one other person, whose name I cannot pin down now will be good for them.

No matter what, Ladoja cannot defeat Ajimobi at the Supreme Court.

More political parties will be registered. Not all House of Assembly speakers will finish their terms. It is only prayers that will make the Taraba woman to go back to that seat.

Nuhu Ribadu must be very careful. Tambuwal must be more efficient because there is a move to disorganize his political structure. Atiku should seek the face of God very well because some peo­ple want to create trouble around him and destabi­lize his political machinery.

Jigawa State governor should be careful about accidents and political crisis within his domain. Some people want to hijack power from him. We must pray that we don’t lose any of our former first ladies. Let’s pray that the governors of Imo, Enugu, Cross River states will not have crisis. Anambra State governor must not decamp from APGA. If he dumps the party, he will have prob­lem getting a second term.

Yahaya Bello must not underestimate James Faleke. He must seek the face of God, otherwise Faleke will win in court. Only the face of God will help him retain the governorship seat. When Yahaya is there, they will not give him peace of mind.

Seriake Dickson has to pray very well to retain his seat.

Governor Udom Emmanuel must not joke at all with the rerun election. He must seek the face of God in order to retain the seat.

INEC officials must be prayerful against acci­dents. There will be a lot of criticisms against the INEC chairman, which will lead to a plot against him before the next election. He must be more prayerful.

Buhari must not overlook Biafra. He should dialogue with them. He must not hold dialogue with Boko Haram. If he does it, he will destroy his administration. Nigeria will face a lot of ag­itations by different groups. Then Buhari will call for confab, but he will not do anything with the report. His government should not see these predictions as doom messages, but as a warning and follow the advice appropriately. It is very important.

Let’s hope and pray that we do not lose any judge or that lawyers don’t go on strike. Some judges will be indicted.

There will be too many fire disasters. The gov­ernment must invest in firefighting equipment. The GSM networks (Airtel, Etisalat, MTN) will lay off some staff. There will be contest for the sponsorship of the league between GLO and some other networks. MTN must be particularly watchful to avoid explosion in a major storage facility.

Newspaper houses must pray that their staff will not riot because of salary issues. Let’s pray that no journalist is lost, that no Nollywood star is lost.

NFF will have crisis. If our club sides play very well they might win a cup. They have to be motivated or they might not perform well. Government efforts to alleviate poverty will not be easy, fruitful. I see a lot of crises: Kanuri-Fu­lani crisis, Hausa-Fulani crisis. We should pray against massive fish poisoning in the river.