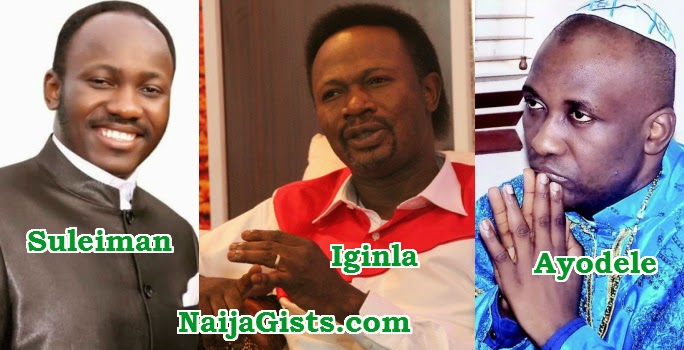 December 27, 2016 – Top 10 Unfulfilled 2015 Prophecies About Nigeria, How Popular Nigerian Prophets Got It Wrong

“The Chibok girls will be returned this year; some people will say ‘they are just using religion to deceive themselves. How will the girls be rescued?’ You will see. I didn’t say it, it is what God said and I believe it.” However, with less than a week to the end of the year it is yet to be seen if the girls will be freed by their captors.

Primate Elijah Ayodele Babatunde of INRI Evangelical Spiritual Church, Prophet Joshua Iginla of Champions Royal Assembly predicted the return of the disease to Nigeria after the country was declared Ebola-free in 2014.

Although there were few instances of Ebola scare in Nigeria in the outgoing year, no confirmed case has so far been recorded contrary to widespread predictions about the return of the deadly virus to Nigeria.

Plane crash was yet another recurrent prediction about the year. But barring few cases of emergency landings and near crashes, the nation’s aviation industry has so far been turbulent-free, contrary to prophecies by Prophet Iginla, Primate Ayodele and Apostle Suleiman, who predicted air mishap except intense prayers were offered to avert air disaster.

Apostle Joshua Suleiman of Omega Fire Ministry, Delta State, perhaps was speaking about the late Abubakar Audu of Kogi State when he claimed to have seen a man winning governorship election but never allowed to rule. Audu, candidate of the APC in last month’s governorship election in Kogi was coasting home to victory when report filtered in about his demise.

The man of God equally rightly predicted the reelection of Ogun State governor, Senator Ibikunle Amosu and Tambuwal leading Sokoto State but his prophecy on Governor Rochas Okorocha moving to PDP and El-Rufai losing his governorship ambition in Kaduna missed the mark by miles. Prophet Williams Onuoha of Galilee Christians and prophet Anthony Nwoko were unanimous in their prediction of Igbo President succeeding former President Goodluck Jonathan. While the former categorically predicted the emergence of Imo State governor, Rochas Okorocha as Jonathan’s successor, the later simply foretold a Nigerian president of Igbo origin.