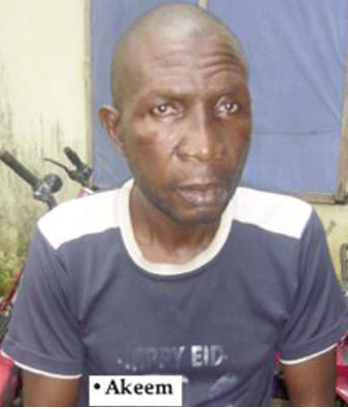 According to The Nation, one of the principal suspects in the alleged murder of a Police Inspector, Mr. Sunday Musa, has given details of how the deceased officer was tortured, killed and buried over a land dispute involving two families.

Fifty-one-year-old Akeem Balogun said the late Police Inspector died after he was hit in the head with a big stick when he came in a van with three other policemen to intervene in a land dispute between the Onojomaja and the Ogunbekun families in Ibeju Lekki area of Lagos State.

The officer in charge of Special Anti- Robbery Squad (SARS), Sani Paiko Umar, an Assistant Commissioner of Police (ACP), said the incessant cases of armed robbery and kidnapping in the area had prompted him to divide his men into two teams to show police presence in Ikorodu and Ibeju Lekki areas, in order to scare away hoodlums and reduce their nefarious activities in the two areas.

Umar said that the team ‘A’ was posted to Ikorodu area while the team ‘B’ was posted to Ibeju Lekki area. Unfortunately, he said, the people the policemen had gone to protect were the ones who murdered Inspector Musa, who was one of the four police officers deployed to the area.

He also revealed that the suspects and others yet to be arrested were not telling the commissioner of police CP Fatai Owoseni the truth.

A police source revealed that the Inspector General of Police (IGP), Ibrahim K. Idris, was “deeply saddened” by the circumstances of Inspector Musa’s death, hence his decision to direct operatives of his Intelligence Response Team (IRT), led by Assistant Commissioner of Police (ACP) Abba Kyari, to unravel the mystery behind the Inspector’s death. Abba Kyari’s men were said to have immediately swooped into action and recovered Musa’s Ak47 rifle which his killers had taken away.

The grave where they buried him was also found and his remains were exhumed and taken to hospital for examination. The sniper dog the IRT operatives used was also said to have discovered Musa’s phone in Oshokoro community where he was killed.

The source said it was also found that the late Inspector Musa was tortured before he was killed in Oshokoro and buried in the disputed land in Akodo area with his hands tied backwards and a rope tied around his neck to lower him into a grave.

The source also revealed that the exhumed body showed a hole his killers made on the right side of his stomach with pump action rifle, though they are still waiting for the final result of the autopsy.

In his confession, Balogun said:

“I have been a security man at the gate of St. David’s Primary School in Oshoroko community for more than 20 years. I know Oba Olumuyiwa Ogunbeku of Lekki and Baale Olusegun Oyiri. It was a mob that killed Inspector Musa.

“Four policemen came to Oshoroko in a police van. When the people saw them, they thought that they were sent there by the rival Amodemaja community.

So, they started fighting the policemen. When the policemen saw that the crowd was too much, they entered their van and drove off, leaving Musa behind. The people then pursued Musa and grabbed him. They then hit him in the head with a big stick.

But I did not see anybody drive a nail into his head as was being said. “What I observed was that they used a stick to hit him and they tortured him with his hand tied to the back.”