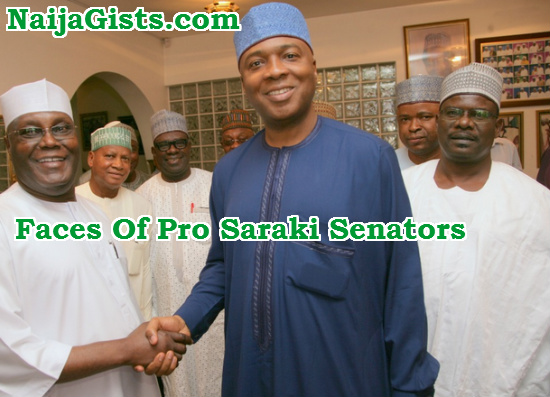 Sept 21, 2015 – Pro Saraki Senators File Appeal Against His Arrest, Vow To Pass A Vote Of Confidence Once Plenary Resumes

The governing All Progres­sives Congress (APC) and op­position Peoples Democratic Party (PDP) are locked in a battle of wits over the fate of embattled Senate President, Dr. Bukola Saraki.

Senators from across the political divide on Sunday night resolved to defend the Senate under the leadership of Saraki from incursion from what they call “a cabal” in the All Progressives Congress (APC).

To demonstrate their resolve to “ride the tide, rise and fall with Saraki,” no fewer than 50 Senators met in a location in Jahi District in the Fed­eral Capital Territory (FCT), Abuja in a marathon meeting which started on Saturday and ended on Sunday evening.

The meeting, which alleg­edly involved conference calls from other Senators out of the country in the United Kingdom, Saudi Arabia and the United States of America vowed “to protect the institu­tion of the Senate from a gang of cabals.”

We gathered that the meeting, which was presided over by a member of the Sen­ate leadership, saw angry Sen­ators point accusing fingers in the direction of “some cabals in the APC with no regard for due process.

“We met on Saturday and at the meeting, we discov­ered that the legal war against Saraki was not done with re­spect for the rule of law. There was no due process in the charges leveled against him at the Code of Conduct Bureau (CCB).

“We decided that everything must be done to deal deci­sively with the cabal. I had cause to explain to them that President Buhari had no hand in the war against the Senate President.

“They wanted to embarrass the Senate but we will let them know that we will sink or swim with Saraki…He will be our president, even in jail. There will be no leadership change; if that is what they are expecting…”

The meeting ended yester­day night with moves to pass a confidence vote on Saraki when the Senate resumes in plenary, it was gathered.

Regardless, it also emerged yesterday some Senators met last Wednesday, immediately the perjury charges levelled against him by the Code of Conduct Bureau (CCB) be­came public.

“Initially, some of the PDP Senators said they should re­spond by convening an emer­gency session where a mo­tion would be sponsored by a member from the opposition to alert Nigerians to the fact that the charges against Saraki was a witch hunt. But, wise counsel prevailed because some thought the move could boomerang on the Senate.”

Besides, some ranking Sen­ators may have decided not to wade into the matter officially because “some of us have anti-corruption cases in court. This is not the best time to be seen shouting about Saraki’s travails.” Another set of Sena­tors reiterated that they are “businessmen and any noise now may jeopardise such business interests. “You don’t fight government and win,” another member from the South said.

In a related development, some Senators are expected to prevail on Saraki to discard “the winner-takes-all attitude” and implement the composi­tion of Senate leadership let­ter sent to him by the party.

“We know the mood of the party; they want some Sena­tors in the leadership…It’s time to allow party supremacy in some areas,” a Senator dis­closed.

A meeting to that effect, it was learnt, held at a house in the Jahi District of the Federal Capital Territory (FCT) last week. A source said Senators mulled another confidence vote “to show that Senators are with Saraki…We will not allow anyone or cabal think they can rubbish the Senate as an institution and get away with it.”

In a related development, Saraki, it was gathered, is reportedly looking to the Ju­diciary as the last resort to evade arrest and prosecution today.

Daily Sun gathered that last Friday, soon after the CCT Chairman, Danladi Umar, issued a bench warrant for his arrest, a flustered Senate President immediately left his office in the new Senate wing of the National Assembly.

A ranking Senator, how­ever, disclosed on Sunday evening that “Saraki may not even show up in the CCT today. I got to know that the appeal against his arrest may have been served on the CCT chairman same day (on Friday); even though Daudu promised to personally show up with him at the tribunal today…” More revelations, however, indicate that Sara­ki’s legal counsels, M. A. Mahmud and Joseph Daudu, former President of the Ni­geria Bar Association (NBA) were prepared for “any even­tuality” during the hearing at the CCT last Friday. A source privy to the arrangement dis­closed that,”on Friday, when they were in court, both counsels to the Senate Presi­dent, “having read the body language of the CCT chair­man, immediately went into action. They approached the Appeal Court and got an ap­peal against his arrest ready… in fact, between 2:30pm and 3:00pm on Friday, the ap­peal was ready, filed imme­diately and the Chief Regis­trar signed and took it to the Court of Appeal where it was stamped and possession was taken of the Certified True Copy (CTC). “That was why it was difficult to carry out the bench warrant issued on him by the CCT chairman.”

On Wednesday, Septem­ber 16, the Federal Govern­ment, through the CCB, filed a 13-count charge against Saraki, accusing him of false declaration of assets includ­ing failure to declare some properties in the highbrow Maitama district of Abuja and Ikoyi, Lagos.

Speaking in an interview with newsmen in Ilorin on the recent visit of the body to Senator Saraki at the Na­tional Assembly complex, Abuja, the natinoal president of the IEDPU, Alhaji Abdul­hamid Adi wondered why the CCB failed to raise any issue concerning the Senate Presi­dent’s asset declaration forms since 2003.