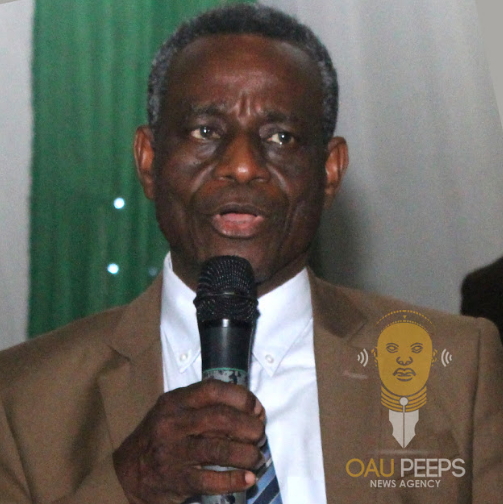 It was about 11am on July the 14th of 2017. The massive stadium-like Amphi Theatre of the university was packed full with jubilant and ecstatic students waiting eagerly. Moments later professor Anthony Elujoba, the former Acting Vice Chancellor, in company of the current Vice Chancellor and top management staffs of the Obafemi Awolowo University stepped into the hall and the large crowd in the massive building erupted.

‘Don’t join them!’ their rhythmic chants mirrored their adoration for the man fondly called the ‘Village Chemist’.

It was the same reaction that greeted the news of the release on bail of the professor that filtered into the university community earlier that day.

6am that morning, staffs and students had converged at the university’s Freedom Ground where they organized themselves into a large convoy of buses and vehicles that looked like a large, long metal snake quickly snaking its way from the ancient city of Ife enroute Ede in Osun state.

Their decision was informed by the action of the presiding judge, who, though had announced that proceeding of hearing in the professor’s case would begin at 11am few days before, actually started earlier, completed hearing and remanded the elderly professor in custody before arrival of staff and students. The early arrival was therefore aimed at forestalling a repeat.

The shouts of ‘Don’t join them!’ were not directed at professor Elujoba who the students saw as one of them but to the newly minted VC, professor Ogunbodede. They believe there exist a battle between the entire university community and a corrupt cartel of very powerful individuals. Elujoba had taken sides with the students and so, their admonition to the new man was simple: take your side with truth and govern with a kind heart.

The story that inspired this unprecedented show of solidarity started around April of 2016.

Anthony Elujoba, born in 1948, an indigene of Ile-Ife, is a professor of Phamacognosis who had served meritoriously with integrity at various capacity spanning many years in the university and was nicknamed ‘village chemist’ because of his involvement in the research for medicinal plants.

Those who have met him say he is a simple man who interacted with people justly, loves God deeply and is dedicated to family.

An acquaintance who attended the same ‘Our Lady of Perpetual Light’ parish, the Catholic church in the university campus as the professor  narrated how the man conducts his affairs when in church with so much humility that it was difficult to tell he was the VC. He would not allow his security details into the church unless they were coming to worship, and for those who were not Catholics, he would insist they attended their individual churches on Sundays.

Another acquaintance related his encounter with the professor inside the banking hall of one of the banks on campus. He was standing in one of the usually long chews that were common inside banks on campus, when the professor came in unannounced with some security details. Like many in the chew he did not immediately recognize the man because there was absolutely no buzz as he entered the bank. When someone in the crowd recognized and pointed out who it was standing right behind my acquaintance, jittery, the crowd scrambled to make way for the man to get to the cashier where he could do his transaction, but he refused the gesture and insisted on waiting his turn.

This is the typical Elujoba that everybody on campus knows. A man who, upon assumption of office, made clear by his actions that he was favourably disposed to the welfare of staffs and students. A man who shunned all the paranephalia of office, refused, against pressure, to move into the sprawling fortress-like VC lounge, a man who was reported to have paid back into the university coffers a check written in his name, a man who took a tour of campus especially the students’ hostels, where he was reported to have wept upon discovering the condition under which the students were living.  Soon after that visit, renovation work began in the hotels.

Therefore, it is perfectly understandable why the university community was surprised, shocked and thrown into pandemonium when in July 2017 the man alongside the university Bursar Mrs. Akeredolu, were arrested and arraigned on a 7-count charge of intent to steal money belonging to the school and conspiracy to defraud the institution.

Those who argue that the university had been held down for years by the shackles of corruption and that the arrest was a clear case of a powerful group fighting a good man say the story of his path to arrest and humiliation began in 2016.

For example, in his very touching article on so Facebook, Olaolu Olayeni, a lecturer, explained that before Elujoba, promotions were selective, teaching appointments were gotten without interviews, university unions were infiltrated and rendered ineffective, students union were proscribed and their hostels were like prison yards.

The final straw was the illegal deductions for many years, from staffs’ salaries, under the auspices of an unpopular group unknown to the law called the Committee of Vice Chancellors.

Because of all these glitches, for years the institution had been wallowing in crisis resulting in conflicting interests competing for power.

The struggle became intensified 3 months to the expiration of the tenure of former VC, professor Bamitale. A series of meetings and alliances which led to the stalemate of May 2016 where over 10 aspirants were screened out quickly followed. As an indigene of Ile-Ife, it was reported that a number of prominent people played a role in the emergence of professor Elujoba because he was considered a candidate that would ensure trust in the relationship between management, students and staff. With this, on July 21 2016, with 201 votes ahead of professor Lamikanra who had 5 votes, Elujoba was overwhelmingly voted for by the senate, throwing the entire Ile-Ife community into wild jubilation.

Some reports say this angered the vested interests who had been pushing the installment of one of their own, a stooge that the university community roundly rejected.

The university community felt they could trust professor Elujoba. He proved them right in his first 6 months in office, a thing that inspired staffs under the auspices of ASUU and NASU to begin to push for the stoppage of the deductions and refund of past deductions in arrears. With this, it became obvious they were on a collision course with the powers that be, and the professor found himself in a situation where he had to choose a side.

There were a number of unfruitful negotiations that sought to resolve the issue leading to the feeling that the university bursar was standing in the way of staffs. This led to a showdown in which it was reported that even the professor in trying to mediate peace received some blows. It was the desire to douse the tension that led the professor to approve the usage of certain monies illegally kept in a hidden account, which he became aware of that same day, to pay staff.

He had refused to join the committee of Vice Chancellors, initiated investigations into past administrations, and also advised the incoming VC on the day of his inauguration not to join them. This is what many say angered the powers that be, making his recent experience a case of a wounded lion waiting patiently for its prey to make a costly misstep.

Comrade Niyi Sunmonu of ASUU, OAU chapter, explained that professor Elujoba was empowered by the recently constituted university Governing Council to approve the payment. Yet, this did not prevent his arrest. His opponents say the monies were supposed to be transferred to the TSA account before disbursement, but how is that the professor’s fault, since he did not know about the existence of the monies until the day staffs took the bursar hostage?

True to the classic saying that when two elephants fight it was the grasses who suffers, students of the university and a number of organizations that maintained offices within the confines of the campus suddenly discovered they were at the receiving end. For starters, electricity went out, and with it, every other activity, both academic and non-academic swiftly followed.

Yet this did not prevent the massive show of solidarity as many protests were organized by the staffs and students. The students felt they had suffered so long, and that the professor had brought them liberation so that a few more days of suffering the absence of internet, light, water and lectures was worth a sacrifice to make in ensuring their voices were heard and a good man was not punished unjustly.

Professor Elujoba would not be the first man to preside over affairs in OAU nor will he be the first to be involved in some type of controversy. But he would be the very first whose story, as well as elicit certain truths about our society, would also give us a clear example of how certain individuals can hide behind the law, manipulate it and public institutions to carry out their vested interest.

It is also proof how Nigeria has been taken over by darkness brought about by corruption and evil, how people in authority today are readily swayed by this darkness which is a temporary dust heap, a shadow of the world of light, an illusion that can vanish any moment, which was meant to distract our attention from the light of being good and treating fellow men with fairness; a thing which is supposed to be the true essence of existence, which all religions preach yet very few adhere to.

Many leaders in Nigeria today are evil, materialistic and foolish, they often deny the existence of light and dwell instead in the darkness of greed and corruption, seeking always to thwart the good intentions of, and punish men like Elujoba for being different.

That the entire university community could unite behind one man and tell the world through their actions that this man was a good man, that the professor could show that governance can be done with sympathy of heart towards the unjustly treated is something worthy of emulation.

It is something that proves that we can free ourselves from whatever shackles we find ourselves in, whether political or otherwise, if we are united as one and speak with one voice. As we wait for the outcome of this matter, this is the mindset I expect us to carry into the 2019 general elections.

And Jesus’ words that no matter how black the darkness, it would run for cover at the slight appearance of even the tiniest strain of light, would hold true for us as we do so.

Continue Reading
You may also like...
Related Topics:professor anthony elujoba