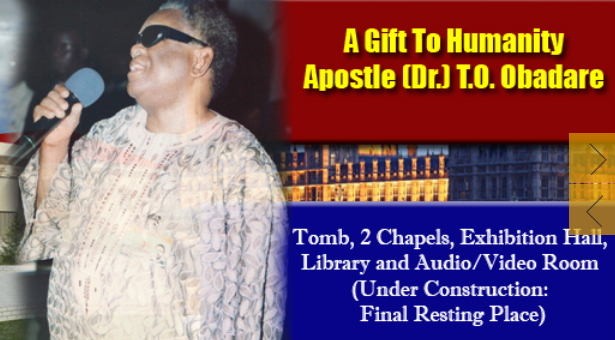 The late founder of WOSEM, Prophet Timothy Oluwole Obadare who died on the 21st of March, 2013 is set for a grand burial courtesy of Osun State government.

A whopping sum of 35 million Naira has been approved for the burial of the highly respected man of God.

This was revealed by Osun State Commissioner of Finance, Mr Wale Bolorunduro.

According to him, the N35m was approved by Governor Aregbesola due to Prophet Obadare‘s timely contribution and kindness to mankind.

“The sum of N35 million is earmarked for the construction of mausoleum, burial ceremonies and intervention works of the late spiritual leader who joined the saints on Thursday March 21, this year”
“We believe that the mausoleum of the late prophet will be a great benefit to Osun in terms of tourism development as it could attract the influx of tourists to the state”

Here is a brief memorial from late prophet Obadare’s family

“We, the family of Apostle Obadare, give praise to God and are grateful for the enormous outpouring of testimonies, love and support from all and sundry far and near. Our prayer is that the Lord will continue to extend His love toward you. One thing that our father would wish is that you remain steadfast in Christ Jesus, to ensure that you can meet him again to enjoy eternal glory together, reigning with Christ our Lord. May the Lord God of our father bless you, and may his legacy never die.”